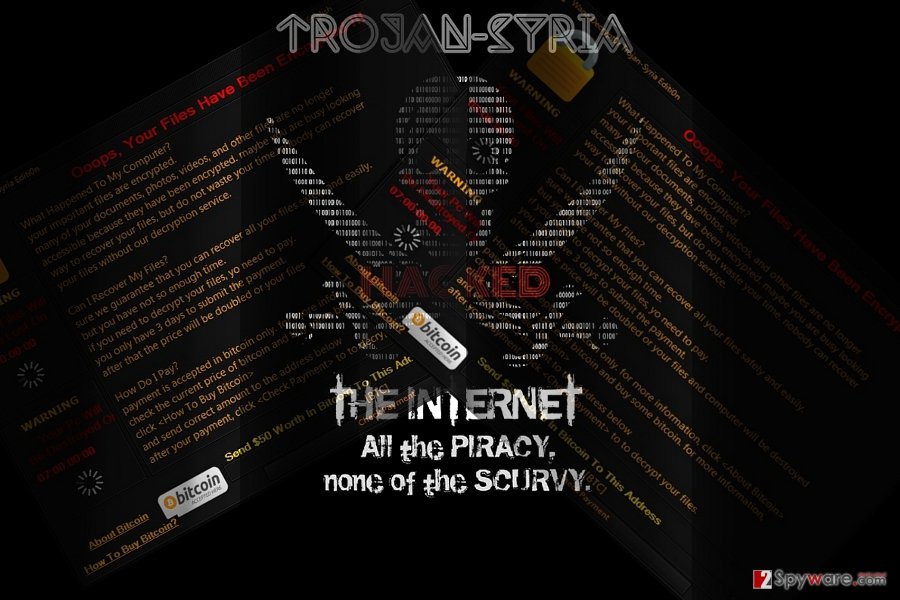 Wana Decrypr0r Trojan-Syria Editi0n virus functions as a file-encrypting threat capable of encoding files with AES ciphering. Despite its ransom message which is the rip-off of the famous WannaCry malware[1], the virus is actually a sample developed on the basis of HiddenTear threat. It joins other imitations: WhyCry and CryForMe viruses.

In order to make it more persuasive, the malware appends a .wana file extension to all affected files. In contrast to other HiddenTear threats, this sample is quite aggressive. A couple of days ago since the first release of the version, the second version had been released which attaches the .wanacry extension.

Initially, the virus disguised under Generic.Ransom.WCryG.43D840C9 or similar coding, but later on, it revealed its true origin – Trojan.Ransom.HiddenTear.H. On the other hand, it is quite modest as it demands only $50 in exchange to the affected files.

On the other hand, such small amount of money might encourage users to transmit the ransom. We do not suggest this option but rather concentrate on Wana Decrypr0r Trojan-Syria Editi0n removal. ReimageIntego or Malwarebytes assists you in this process.

As the cyber world is gradually recovering from the chaos caused by the original threat WannaCry, other felons exploit netizens‘ fear rather than devise a really destructive threat.

Indeed, Wana Decrypr0r Trojan-Syria Editi0n malware sample serves as a more elaborate rather than previous samples of HiddebnTear-based ransomware. It targets a wide range of various file types. Furthermore, the fraudsters alarm users to remit the payment within three days. Otherwise, the files will be lost.

The ransom which amounts 50 dollars should be transmitted to the dedicated bitcoin address. Since the malware has a potential to evolve into a bigger cyber menace, users may risk paying the money. However, note that it does not raise the chances of retrieving the files.

Ways to transmit the malware

It seems that the authors of this virus are serious as they have launched two versions in a couple of days. Furthermore, the malware gets activates via Wana Decrypt0r Trojan-Syria Editi0n.exe which might be placed in a .zip folder and named as a highly important file. Even if the email is entitled to the notification sent from the FBI, do not rush to open any attachments without verifying the sender.

Additionally, Wana Decrypt0r Trojan-Syria Editi0n hijack may take place if you have weak Remote Desktop Protocols[2]. Note that the malware may also lurk in gaming or peer-to-peer file sharing domains as well.

Vigilance is not sufficient in battling this threat, so ensure additional cyber protection with anti-virus tool. In order to remove Wana Decrypt0r Trojan-Syria Editi0n, malware elimination tools will come in handy as well. 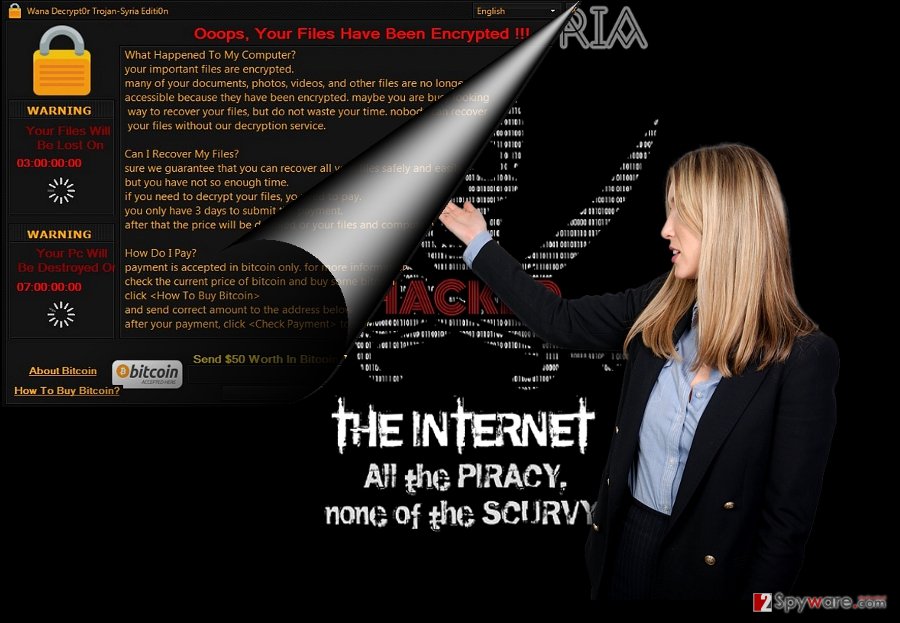 Even if the threat may seem quite destructive and troublesome, make a rush to remove Wana Decrypt0r Trojan-Syria Editi0n virus. For that purpose, already mentioned tools will come in handy.

In case you cannot run the security application, below guidelines will instruct how to receive partial access and complete Wana Decrypt0r Trojan-Syria Editi0n removal. Note that above-suggested programs do not decrypt files so you might find some of our suggested utilities practical.

In case, you still cannot access vital system functions, you may benefit from this mode. However, it takes more time in comparison with the first method.

Guide which is presented above is supposed to help you remove Wana Decrypt0r Trojan-Syria Editi0n from your computer. To recover your encrypted files, we recommend using a detailed guide prepared by 2-spyware.com security experts.

If your files are encrypted by Wana Decrypt0r Trojan-Syria Editi0n, you can use several methods to restore them:

You may find this utility useful as it restores damaged and corrupted files.

Even though the malware imitates WanaCry threat, it hardly deletes shadow volume copies. Thus, this software might be your last resort.

Even the original threat was terminated and specific decryption tool was devised for it, taking into account that it is based on HiddenTear, you may find this free decrypter useful.

Finally, you should always think about the protection of crypto-ransomwares. In order to protect your computer from Wana Decrypt0r Trojan-Syria Editi0n and other ransomwares, use a reputable anti-spyware, such as ReimageIntego, SpyHunter 5Combo Cleaner or Malwarebytes

You can quickly scan the QR code with your mobile device and have Wana Decrypt0r Trojan-Syria Editi0n ransomware virus manual removal instructions right in your pocket.