Win32:Malware-gen is a Trojan infection that affects Windows operating systems 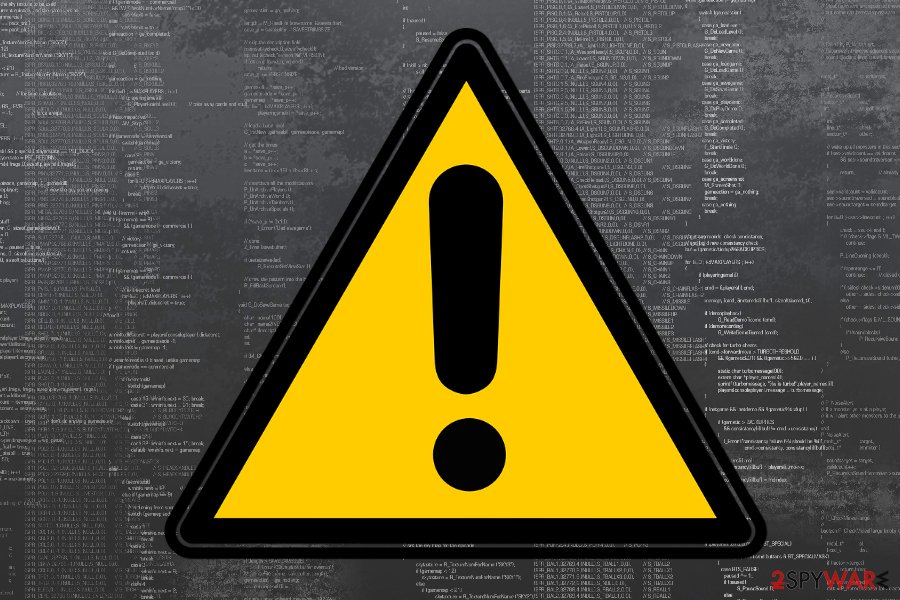 Win32:Malware-gen is malware type for Windows operating systems and is recognized by AV engines under different names. It’s a heuristic detection[1] that identifies trojan horses that are capable of performing various tasks, such as modifying Windows system files, stealing personal details, installing other malware, as well as rerouting users to suspicious domains filled with intrusive ads or tech support scams. It has been reported that Win32:Malware-gen might sometimes indicate false positive.[2]

There are numerous ways of Win32:Malware-gen malware entering the system. However, most of the time Trojan horse travels as an obfuscated email attachment, cracked software or fake update. Therefore, its installation requires user’s participation, in one way or another.

The Win32:Malware-gen virus might be used for many different purposes, for instance:

Viruses, such as RedBoot, Wooly, WinSec, Revenge, BrowserAir, BonziBuddy, FileIce are detected by the majority of security programs as Win32:Malware-gen. Therefore, the appearance of malware might lead to encrypted files, lost financial information or money, diminished browsing experience, identity theft, and other harmful activities. Thus, it’s crucial to get rid of the malware immediately.

Major security programs can identify and remove Win32:Malware-gen safely. Thus, if you suspect infiltration of malware, you should run a full system scan with updated software to look up for malicious components in the system.

For Win32:Malware-gen removal we suggest using Malwarebytes which is a professional malware elimination software. However, you can also rely on your current antivirus program. But before scanning the system, you should update it first.

If Win32:Malware-gen malware prevents from accessing, updating or running security software, you should follow the guide given at the end of the article. It will help to disable the virus and run automatic elimination.

After full elimination procedure, we suggest you scan the computer with ReimageIntego, it can repair your system and help you recover after the malware attack. 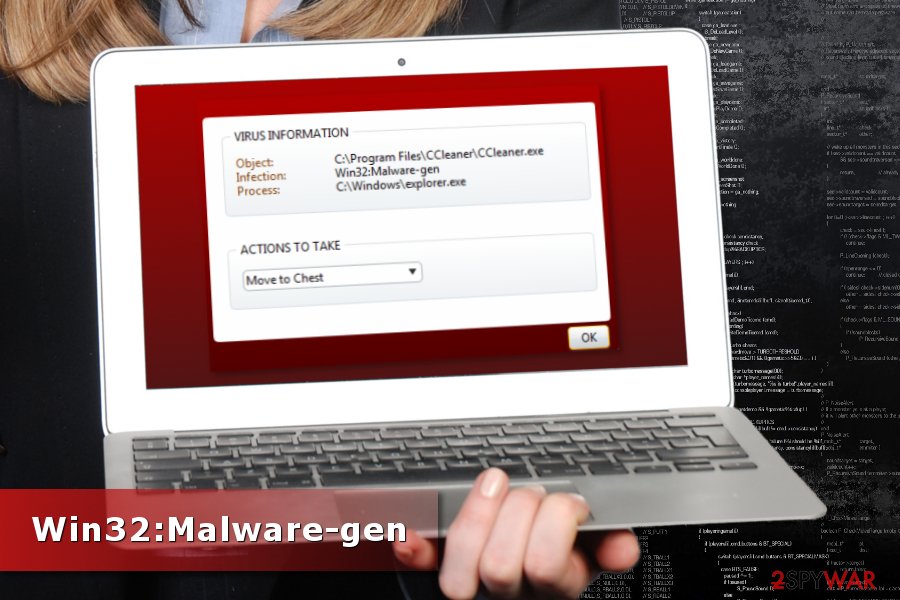 Trojan horses or malware can get inside the computer using several methods. However, most of the time, users are tricked into installing it themselves. These cyber threats rarely attack themselves by exploiting system vulnerabilities.

Most of the time malware infiltrates the system when a user:

Win32:Malware-gen contains various cyber threats, so penetration strategies might differ. Thus, you should be careful and pay attention to online security tips to avoid the attack:

Win32:Malware-gen can affect all platforms that operate Windows-based systems

Delete Win32:Malware-gen from the system

The only correct way to remove Win32:Malware-gen from the device is to run a full system scan with a reputable malware removal program. This group of malicious programs might include numerous different files, programs or components that have to be eliminated altogether.

For Win32:Malware-gen removal we recommend using powerful anti-malware software. However, don’t forget to update it before the system scan! Additionally, some cyber threats might block access to security programs, so you should find the instructions below handy

If you cannot run or install security software, you should reboot the system to Safe Mode with Networking.

Finally, you should always think about the protection of crypto-ransomwares. In order to protect your computer from Win32:Malware-gen and other ransomwares, use a reputable anti-spyware, such as ReimageIntego, SpyHunter 5Combo Cleaner or Malwarebytes

You can quickly scan the QR code with your mobile device and have Win32:Malware-gen manual removal instructions right in your pocket.