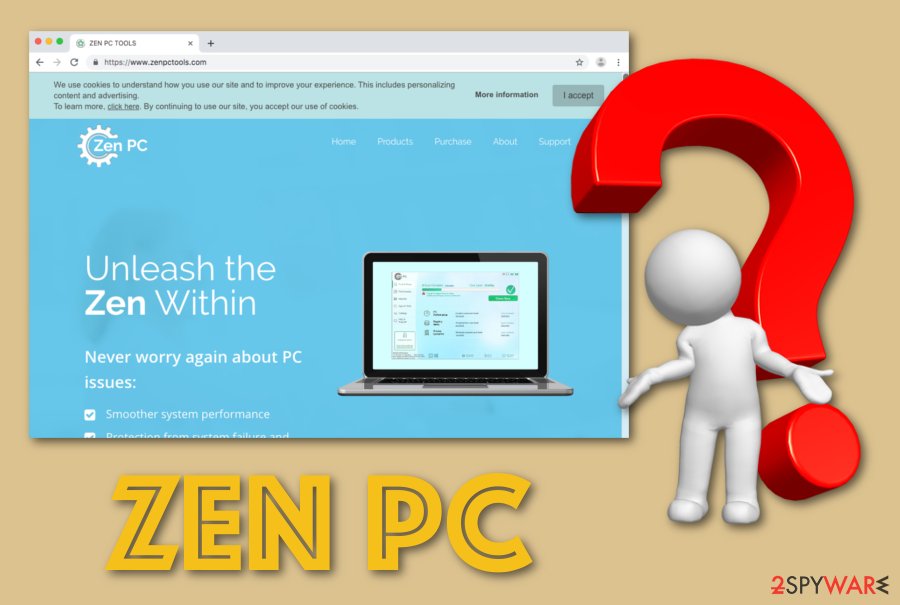 Zen PC, released by International PC Mechanics, is a rogue cleaning tool that has been promoted intensively on zenpctools.com. However, such advertisement for this program does not mean that is full of useful things and you should use it right away. Actually, the term Zen PC virus has been floating around the Internet sphere and confusing some people about this program's true purpose. It is known that this piece of software can be downloaded not only from its original source but also in bundles of freeware. This is why the program falls into the PUP category.[1] Nevertheless, another category that the tool is included in appears to be scareware. Once the program initiates a full check-up, it shows misleading results of errors which are a way to scare users about the risk of potential danger to their systems and convince them to buy the “cure” which is the advanced variant of the software.

If you make a visit to the page where Zen PC is promoted officially, you might be surprised by the big number of advantageous features the developers provide about this program. It is described as a perfect tool for receiving instant scan results, enhancing the system's performance level, removing corrupted files, and similar.

However, this is just a trick to give a look of usefulness to Zen PC. Another claim that might encourage users to purchase the licensed version of this program is the “money back guarantee” line. Be careful as everything might be not as it seems from the first view and ending up with useless software and monetary losses is definitely not your expectancy.

Besides, you need to be careful with the information that you provide to Zen PC developers. In the Privacy Policy, these people claim that the user has to type in some personal details about himself in order to purchase the full product:

Certain functions of Zen PC Software will be available for you after you provide your full name, post address, email address, detailed payment method information. Such information may serve us if we want or need to contact you.

Be aware that all sensitive details that you provide to Zen PC might be accidentally hacked by bad actors. If your personal information is held in the hands of criminals, do not be surprised if it will be used for illegitimate purposes, e.g. data theft in the upcoming future. Additionally, other crooks like to put sensitive data for sale on the Dark Web[2] markets. 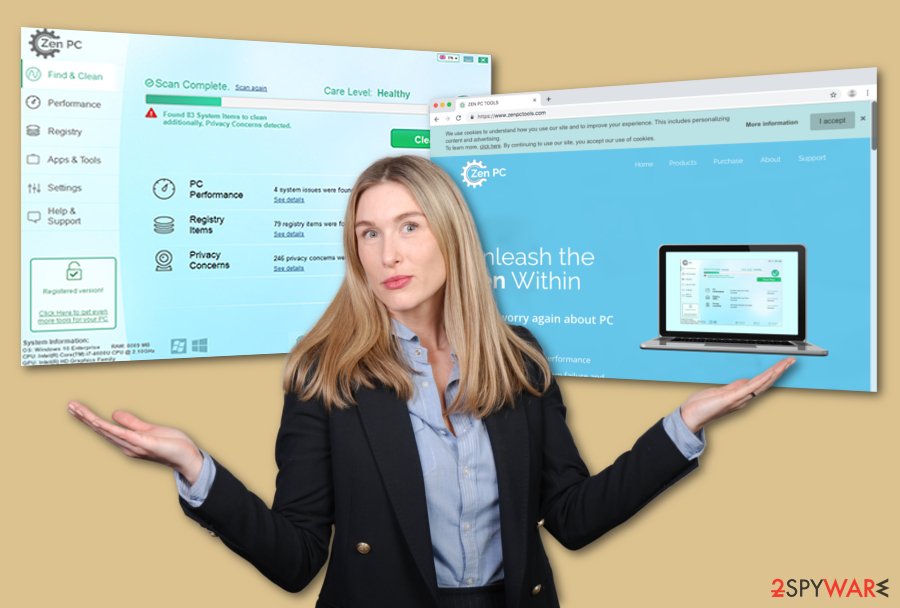 As you can see that this software is not dangerous itself but it might relate to indirect harm. Additionally, the website where this tool is promoted might push annoying adverts or include odd hyperlinks. This is another way to be taken to malware-laden content. The best way to avoid such risk is by performing Zen PC removal process.

There are two ways in which you can successfully remove Zen PC. There is a basic manual method provided at the end of the article that suits both Windows and Mac operating systems. Additionally, you can use automatical software such as Reimage Reimage Cleaner Intego for discovering all suspicious content and continue with its elimination also automatically.

Note that Zen PC is not the only one of its kind lurking out in the cyberspace. There are numerous similar programs relates to scareware. Some of them are developed for Mac computers only, some are for Windows, and others can be distributed on both. However, due to the increasing number of Mac users, third-party[3] developers have already released a big variety of rogue tools for them which you also need to be aware of. Some examples:

Besides, if you are still not sure to believe in Zen PC and its provided results or not, you can try scanning your computer with another reputable antivirus program. Once the check-up results are provided, you should measure them with the ones that have been discovered by the rogue security software. 99% that you will find no similar problems. 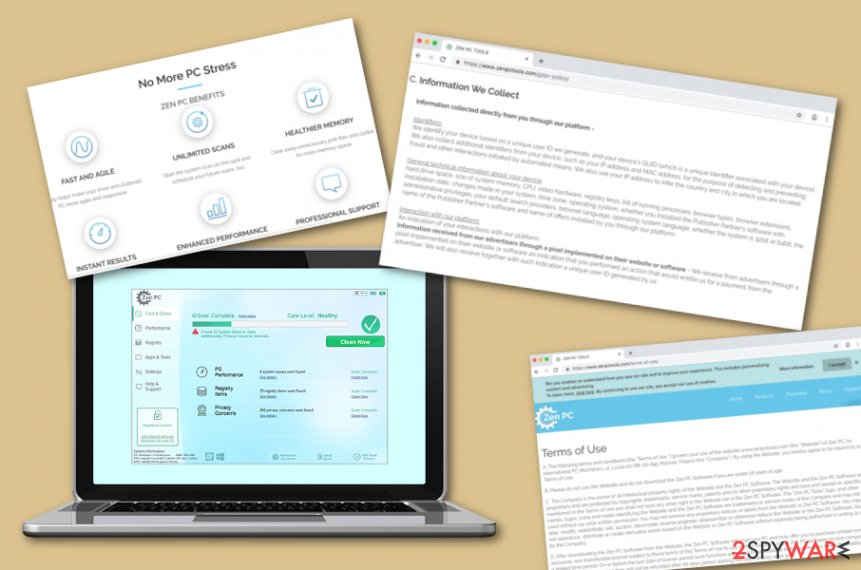 The appearance of third-party security tools is a very doubtful thing regarding security measures. Experts from LesVirus.fr[4] claim that these programs are promoted not only on their original websites but they also travel in software bundles or might be carried by more than one third-party developers via unsecured Internet sources.

Gladly, there are some techniques to prevent the annoying appearance of suspicious security software. Despite the fact that downloading and installing anti-malware protection should also be a necessity for every user, the person also needs to take manual actions against the prevention of potentially unwanted content. Such steps can be:

If you have been searching for ways to remove Zen PC from your computer, you have come to the right place. Here you can find two elimination methods for this rogue security software. Below are instructing guidelines for those users who want to clean their Windows or Mac computers manually. However, this is not the only possible option.

You can complete Zen PC removal by using automatical tools also. However, make sure that you opt for a reliable program and check if it is updated properly. This software is capable of saving your time by completing the entire work in a few minutes time duration. Also, it works perfectly for users who have less experience in the virus removal field.

You can clean your Windows computer system from Zen PC and additional components with the help of the following instructions:

Eliminate all suspicious files and processes related to Zen PC software from your Mac OS X system. If you need some help, complete the following steps:

You can quickly scan the QR code with your mobile device and have Zen PC manual removal instructions right in your pocket.