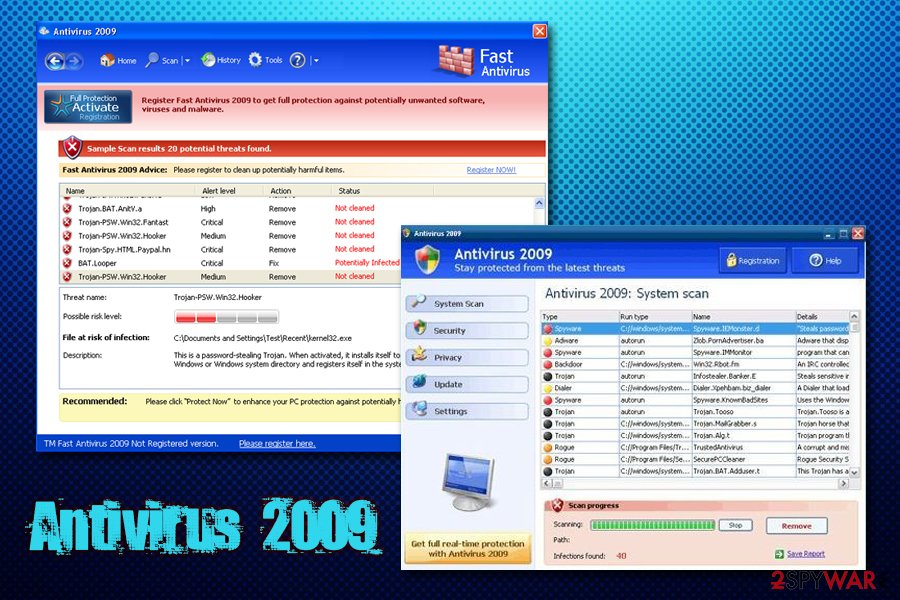 Antivirus 2009 is a rogue anti-spyware[1] application that is presented as a tool that can defend users from malware, as well as malicious sites. However, the application is absolutely useless, and scammers are merely trying to make users buy its licensed version in various deceptive ways.

Antivirus 2009 is one of many re-branded programs that were popular during the time, such as System Antivirus, AntiSpyware 2008, Internet Security 2010, Total Security, PC Defender Plus, and many others. All of them perform one function on the machine – run a background process that continually spawns intrusive and fake warnings about malware infections and tries to make users buy its full version.

However, because the scanner is fake, it will not protect from malicious software. In contrary, Antivirus 2009 acts more like malware itself and should not be trusted. Besides, users who pay might disclose their credit card information to unknown parties or even criminals that can sell the data on the black market for profits.

No matter how ironic it might sound, Antivirus 2009 is a virus itself, as it performs malicious tasks on the system (which is file modification) in order to make users hand their money to its developers. Here's what Antivirus 2009 virus attempts to do on the infected system:

Antivirus 2009, and all its sister programs, often use familiar words that create a false sense of legitimacy. Additionally, fake apps often imitate the UI of well-known software, such as Windows Defender.  However, these are simple social engineering tricks that have been used for years now and are one of the main factors why users get tricked into installing malicious software intentionally, thinking that it's a tool that can actually help them.

Instead, users who agree to purchase Antivirus 2009 might actually harm their system to the point it's not repairable. Besides, exposing payment information to rogue software developers is not a good idea – they are showing fake alerts and BSODs to users, so taking the sensitive data and selling it on the Dark Web might be an excellent idea for them as well.

While the malware is old, it does not mean that you can altogether avoid it, as it was spread within software bundles. Besides, torrents and other pirated software sites are filled with installers that bundle unwanted programs or even malware. Therefore, if you unexpected scans on your device, make sure you quickly remove Antivirus 2009. For that, you can use legitimate anti-malware software or take care of its termination manually, as explained below. 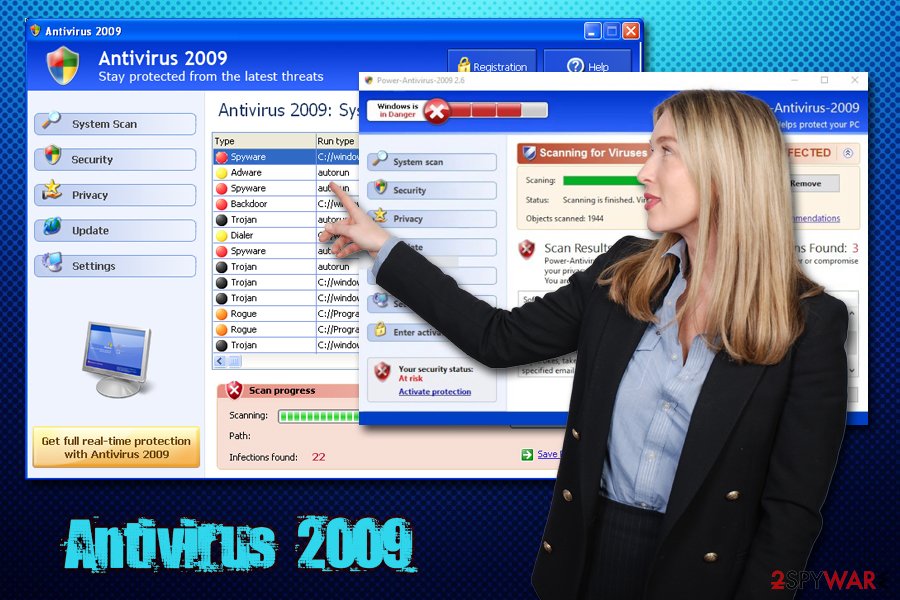 The technique of creating a fake problem and then offering a fake solution is also used by tech support scammers, as well as websites that claim fake infections. The latter is a mere trick and can be simply ignored (however, many users still fall for it due to lack of IT knowledge) while engaging in tech support scam conversations might result in significant monetary loss.

Malicious programs like  Antivirus 2009 are now rare, as many security applications instantly detect them, and the overall awareness of ever-evolving internet community has risen. However, there are still plenty of deceptive programs that, while not as intrusive, flag harmless files (such as Google's cookies or minuscule registry[3] entries) as “an issue.” Great examples of such apps include Advanced Mac Cleaner, TuneupMyMac, My System Mechanic, MPC Cleaner, and many others.

If you managed to get infected, you should hurry up Antivirus 2009 removal. Due to malware's nature, we highly recommend using sophisticated anti-virus scanners instead of manually tampering with the infected files. Besides, you should also scan your device with Reimage Reimage Cleaner Intego as a remedy for the system changes made by Antivirus 2009.

The lack of user computer knowledge is what drives many rogue anti-spyware software developers, as all they need to do is show a fake but very “scary” warning claiming system compromise. While most of such hoaxes are delivered via the browsers nowadays and can be turned off by closing down the tab, malicious applications will not leave users alone and display fake messages, change system configuration settings, and perform many other unwanted activities.

Therefore, it is important staying away from such applications in the first place. If you are looking for a security program, make sure you do not download one from dodgy third-party sites, as they might offer hoax programs as a solution to your problems. You should rather trust reputable sources – read some reviews before you proceed with the installation.

Another important way to protect your machine from unwanted software is by carefully dealing with shareware and freeware apps. Installers are often bundled with third-party programs that might even be malicious.[4] To avoid that, experts[5] recommend never to rush the installation process and carefully read the details presented in each step. Most importantly, make sure you pick Advanced or Custom settings and terminate all the unwanted programs before finalizing the installation.

Uninstall Antivirus 2009 to protect your computer from unsolicited system modifications

Antivirus 2009 removal can be performed manually – you need to go to the installed program list via the Control Panel and find the entry in question. However, terminating it like an ordinary application will not be enough; the malicious activity might continue. This is because Antivirus 2009 virus changes registry entries and modifies other sectors of the Windows OS.

For that reason, we recommend you pick a reputable anti-malware tool and remove Antivirus 2009 and all its traces automatically. Additionally, because the application might have tampered with Google Chrome, Safari, Mozilla Firefox, and other browsers' settings, we recommend their full reset. For full instructions, please check the step-by-step guide below.

To remove Antivirus 2009 manually, you should check the installed program list on Windows. However, we recommend that users scan the device with reputable anti-malware software to make sure all the traces of the malicious app are terminated.

Get rid of Antivirus 2009 from Internet Explorer (IE)

Reset Microsoft Edge as soon as you terminate the virus:

Once these steps are finished, Antivirus 2009 should be removed from your Microsoft Edge browser.

Your opinion regarding Antivirus 2009 Cancel reply

You can quickly scan the QR code with your mobile device and have Antivirus 2009 manual removal instructions right in your pocket.