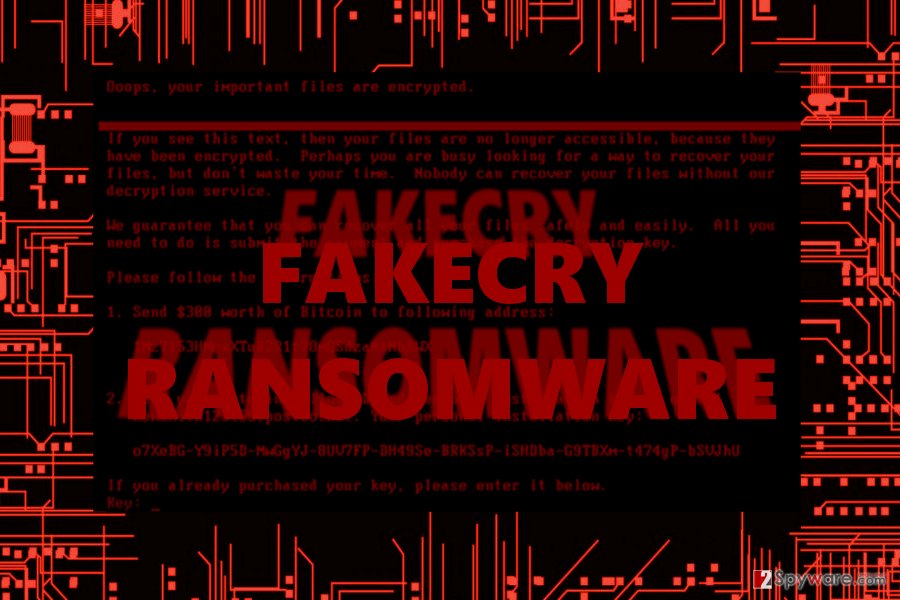 FakeCry virus is defined as a file-encrypted virus which was unleashed together with ExPetr/Petna[1] via corrupted M.E.Doc update network. Due to the massive scale of the malware, the virus was not spotted right away.

Interestingly, the malware pretends to be a WannaCry variation as it includes WNCRY strings in its source code. It turns out to be written in .NET programming language[2].

Besides M.E.Doc servers, the perpetrators seem to use another technique – waterhole strategy. In short, cyber criminals plague often the websites, often visited by targeted victims, with malware. Such virtual infections also serve for espionage purposes.

Even though the malware does not happen to be a genuine WannaCry virus, its distribution technique and the fact it was delivered together with Petna/Petya attack alarm the virtual community. If you were struck by the former threat, you were most likely to experience the annoying effects of the latter malware as well. Remove FakeCry with the assistance of Reimage Reimage Cleaner Intego or Malwarebytes.

Perhaps due to several questionable and even amusing features of the malware and the destructive outcome of the main virtual threat, online media did not grant enough attention to FakeCry malware.
Even though the threat contains references to WannaCry with such elements in “made in China,” it was not considered as a huge threat. However, such assumption might be misleading.

The malware attack is comprised of two stages. Firstly, wc.exe runs on the device and extracts its content – ed.exe. It serves as the main executive of the malware. It is set to encrypt files with the RSA-2048. Additionally, the malware is set to delete shadow volume copies. FakeCry malware also targets a wide range of file formats.

Unlike other malware, the virus drops DEMO_EXTENSIONS folder. It indicates image file extensions which can be decrypted for free. Naturally, the malware happens to be still under development. After the encryption, the malware presents the same ransom note as Wana Decrypt0r 2.0.

Some of the Ukrainian victims[3] have paid the ransom, but one of the perpetrators’ bitcoin address was terminated. It is not advised to pay the ransom. Instead, proceed to FakeCry removal.

The malware spreads via M.E.Doc update network. However, since now cyber security forces have finally revealed its transmission methods, you can prevent FakeCry hijack. If this advice is too little too late, then proceed to the elimination guidelines.

Besides, both, ExPetr and FakeCry, also employs waterhole technique. Thus, it means that even if you are cautious enough, there is still a high risk to get entangled by the malware if you visit a specific infected website. In that case, check whether an anti-virus, malware elimination tool and your firewall are functioning properly. 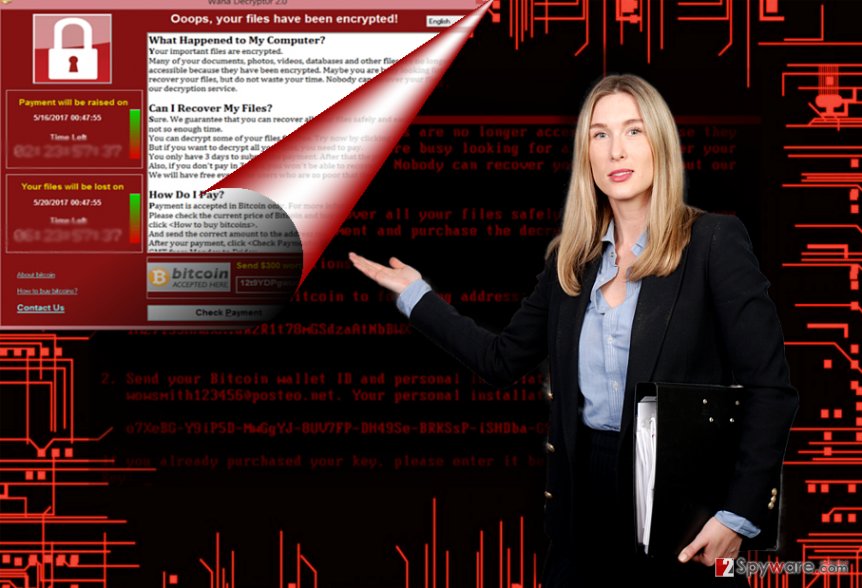 FakeCry disguises under the label of WannaCry virus. It certainly has potential to evolve into a real cyber menace.

You can get rid of it from Windows OS with the assistance of a virus-fighting utility. Taking into account that it is delivered together with Petya, or may spread individually in the future, you might encounter certain FakeCry removal issues.

In that case, restart the device into Safe Mode and launch an anti-spyware elimination tool. Then, you should be able to remove FakeCry virus. Let us warn you not to download any decryption tool offered by the criminals. Since the malware is still under development, data recovery process may not go smoothly. Besides, Ukrainians, Russsian users[4] should be vigilant as well.

Guide which is presented above is supposed to help you remove FakeCry from your computer. To recover your encrypted files, we recommend using a detailed guide prepared by 2-spyware.com security experts.

If your files are encrypted by FakeCry, you can use several methods to restore them:

Until FakeCry Decryptor is released, you might give this software a try. It is promoted as a tool capable of recovering damaged and lost files.

It is not available yet. Try restoring your files from online or system backups.

Finally, you should always think about the protection of crypto-ransomwares. In order to protect your computer from FakeCry and other ransomwares, use a reputable anti-spyware, such as Reimage Reimage Cleaner Intego, SpyHunter 5Combo Cleaner or Malwarebytes

You can quickly scan the QR code with your mobile device and have FakeCry ransomware virus manual removal instructions right in your pocket.