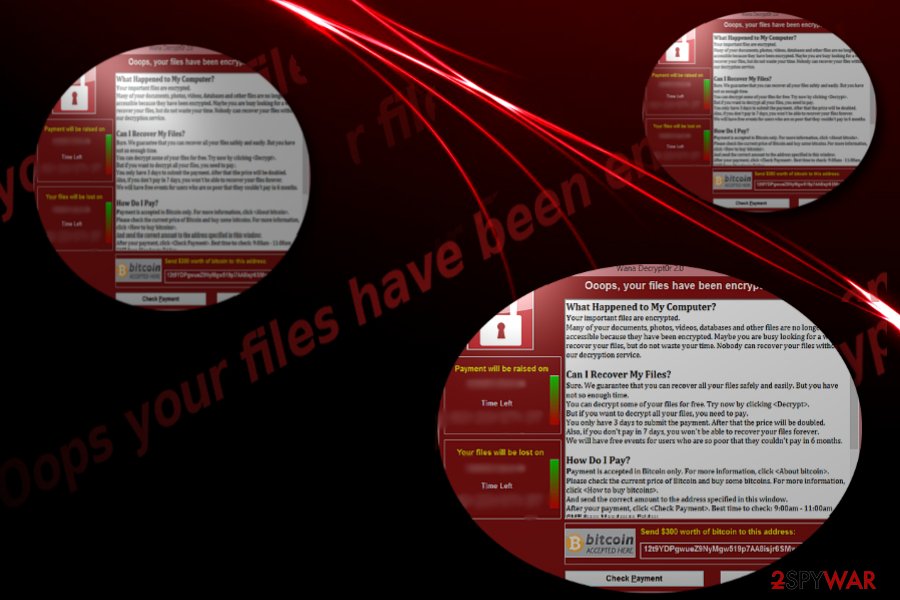 “Oops your files have been encrypted” virus is an alternative name given to an infamous cyber threat called WannaCry virus and other ransomware. This innocent string of words now brings a sense of fear to anyone who has been infected with WCrypt, Wana Crypt0r, WNCRY file extension virus or any other cryptovirus, or at least read one of the numerous articles written about such threats.[1] The “Oops your files have been encrypted” phrase is the first thing that people see when infected with this vicious parasite. However, the biggest issue is the loss of data which is typically encrypted by ransomware. The latest news is showing that the threat has just been updated – at the moment it is attacking servers and domains. The virus is causing an HTML window appearing with the “Ooops, your website have been encrypted!” slogan as a greeting. In this note, hackers are claiming that to unlock encrypted website you need to contact them via spamrslt@inbox.ru.

The phrase “Oops your files have been encrypted” has been actively used by ransomware developers who started using it in their own malicious creations. For instance, the new Petya virus version, which is trying to repeat the success of WCry by employing the Eternal Blue exploit kit, is also showing the same message.

“Oops your files have been encrypted” virus has been known worldwide since 2017, when it all started it has done a lot of things. The newest information about this ransom demanding threat is the ability to attack servers and leave their owners completely disabled.

It is known that this new “Ooops, your website have been encrypted!” ransomware and the previous version spreads the payload via Server Message Block protocol. At the moment, it appears that various domains, sites, and servers have been hacked by this virus. When the payment wallet address (1EwzEjNVtFezGQS5L555r4szP86GJ4n5DR) is googled, the results show a list of sites that are locked by this ransomware.

The short message displayed by ransomware provides these details:

Origins of the WannaCry virus

On May 12th, cybersecurity specialists globally have been summoned for an emergency – the ransomware under the name of WannaCry has paralyzed the activities of the National Health Center, hacked Deutsche Bahn transportation system and Hitachi company and multiple others.[2]

Both, corporations and individual users, did not escape the menace of this malware. It was said to have affected approximately 200 000 devices in 150 countries. The success of this malware lies in the leaked information about EternalBlue vulnerability found in Windows OS based systems.

Users or companies which have been using older Windows version fell into the well-devised trap of the hackers. Personal files have been encoded and marked with .wncry or .wcry file extensions.

Luckily, the rampage of the malware was terminated by a security specialist Marcus Hutchins, who bought unregistered domain associated with the virus. Furthermore, further analysis revealed that the malware might be linked to a notorious group of hackers “Lazarus.” [3]

IT specialists are still convinced that it is too early to lay down arms as the threat may strike again. There have been already several subsequent versions[4]. If you have been affected by this malware, remove “Oops your files have been encrypted” virus. ReimageIntego or Malwarebytes speeds up the process. 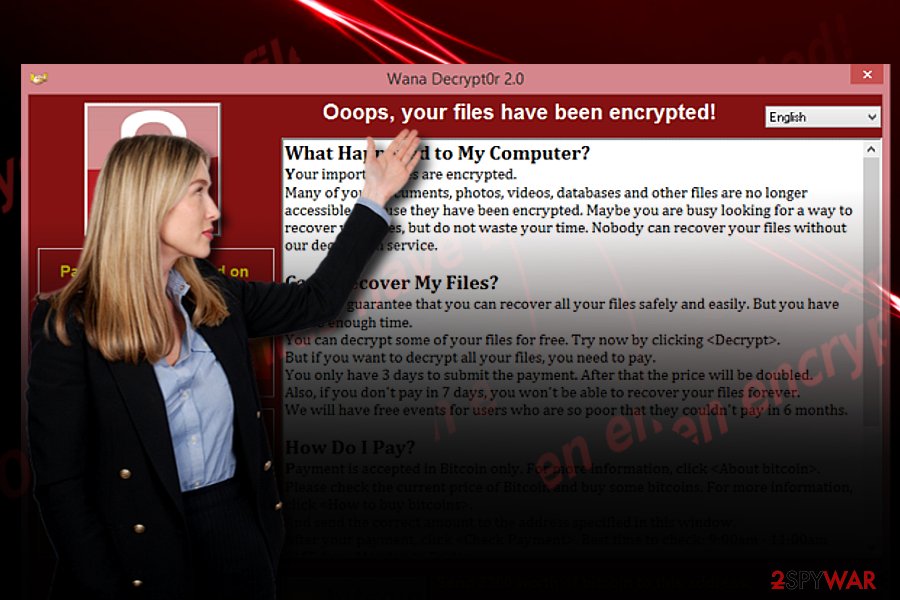 "Oops your files have been encrypted" virus informs users about the state of their files and encourages them to remit payment as soon as possible.

Unlike the majority of Windows OS-based ransomware viruses which spread via spam emails, this malware succeeded in wreaking chaos by exploiting EternalBlue exploit, technically known as CVE-2017-0144. It permits access to SMB (Server Message Block) protocol. Such an exploit has been developed by the US national Security Agency.

This cyber weapon has been kept in secret until the group of hackers known as Shadow Brokers stole it. Corresponding to it, Microsoft issued an update in March, but as the situation revealed a significant number of corporations and users did not apply the update.

Therefore, such mistake granted “Oops your files have been encrypted” malware freedom to wreak havoc. After it invades systems, further on, it behaves like an ordinary virus: encrypts files, launches its @Please_Read_Me@.txt guide with instructions, demands 300 USD in ransom and sets a 7-day period for users to pay. After the expiration, the files are said to be deleted.

Thanks to the malware researcher, the virus has been terminated. Unfortunately, further forecasts are not positive: recently previously emerged UIWIX virus has been gaining power in China.[5] The hackers seem to have eliminated the flaw which let the termination of the virus.

UIWIX virus does not have a “kill switch” and targets outdated systems as well. Unfortunately, this data leak also inspired others hackers to join the ransomware market. Adylkuzz virus is known as another virus which exploited the same vulnerability and is expected to rise in the future[6]. Thus, before we proceed to “Oops your files have been encrypted” removal section, get acquainted with its prevention options.

This malware confirms that having professional anti-malware tools is not sufficient in battling crypto-malware threats. Therefore your participation is of high importance in the prevention of “Oops your files have been encrypted” infiltration. To stay at least a little safer, you should follow some basic rules:

It has been observed that early versions of WannaCry spread via spam messages, so these prevention tips are applicable. These tips will help you limit the risk of “Oops your files have been encrypted” hijack.

Ways to delete “Oops your files have been encrypted” virus

Despite how menacing this virus may be, remove “Oops your files have been encrypted” virus as soon as you notice its marks of activity on the computer. For the successful elimination, you may use malware removal tools such as ReimageIntego or Malwarebytes. Only when “Oops your files have been encrypted” removal is completed, you may start thinking about data recovery procedure. On the final note, we encourage you to remain rational and vigilant and avoid diverting to panic or inadequate precautions methods.

To remove “Oops your files have been encrypted” virus, follow these steps:

Safe Mode should grant you access to the computer. Later on, you should be able to eliminate “Oops your files have been encrypted” virus.

Remove “Oops your files have been encrypted” using System Restore

Guide which is presented above is supposed to help you remove “Oops your files have been encrypted” from your computer. To recover your encrypted files, we recommend using a detailed guide prepared by 2-spyware.com security experts.

If your files are encrypted by “Oops your files have been encrypted”, you can use several methods to restore them:

This is one of the few methods to decrypt files. Since the application is designed for recovering files after a system crash, there is no 100% guarantee that you will succeed in recovering files.

”Oops your files have been encrypted” Decrypter

On torrent sites, “Oops your files have been encrypted” decryption tools may appear. However, note that it might be only corrupted tools released by the hackers themselves. You may need to wait until IT specialists release such program for free.

Finally, you should always think about the protection of crypto-ransomwares. In order to protect your computer from “Oops your files have been encrypted” and other ransomwares, use a reputable anti-spyware, such as ReimageIntego, SpyHunter 5Combo Cleaner or Malwarebytes

You can quickly scan the QR code with your mobile device and have “Oops your files have been encrypted” ransomware virus manual removal instructions right in your pocket.