Fuerboos is a malicious trojan virus that might steal your banking details and login data, although might also be a false positive 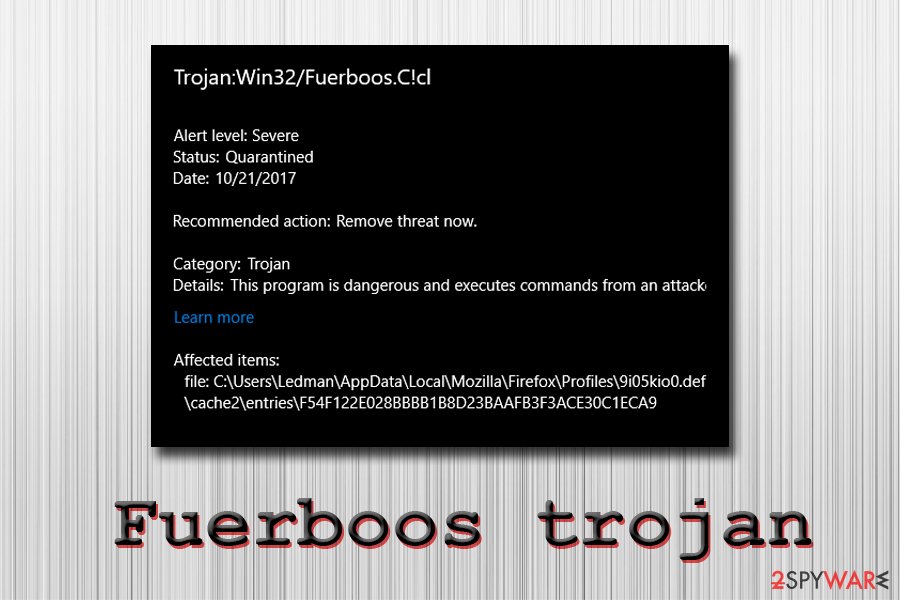 Fuerboos trojan is a generic name used by Windows Defender's machine learning technology to describe malware that has not been encountered before. The detection can indicate the infection of ransomware, a backdoor, botnet, banking trojan, or a crypto miner. Depending on the type of infection, these malicious programs might have different goals, including money extortion, sensitive information harvesting, spying, proliferating another malware, etc.

Nevertheless, because Trojan:Win32/Fuerboos is a heuristic detection, it can also indicate a false positive, as it happens with similar detections, such as Win32/Heri, IDP.Generic, and many others. Users said that legitimate tools like ArangoDB[1], WinZip, as well as Blizzard's video game Diablo II.[2]

While it is possible to be a false positive, it is necessary to find out whether or not the detection of Fuerboos trojan poses any threat to your computer first. The best way to do that is by scanning your device with another anti-malware tool and even confirming with the developers of the program in question. Nevertheless, if the infection is real, it is vital to remove Fuerboos virus as soon as possible.

Fuerboos false positive is detected due to the operation patterns of certain applications. For example, many newly-created apps establish a new Windows service that tracks the incoming requests in the combination of the rare binary – the trait of the newest releases.

If Fuerboos trojan infection is not a false positive, however, you might be facing serious consequences, as threat actors might:

Unfortunately, but Trojan:Win32/Fuerboos symptoms are not consistent, as it depends on the infection type:[3]

Symptoms of infection vary from threat to threat. In general, threat activity can result in unusual system behaviors, including unexpected opening of windows, unusual network connections identified by your firewall, and decreased system performance.

Fuerboos removal should only be performed if you are sure that the detection is genuine. You can use Windows Defender or other security software to terminate the malicious activity on your machine. Once you delete the virus, you should scan your device with ReimageIntego to restore all the affected system files for a swift recovery. 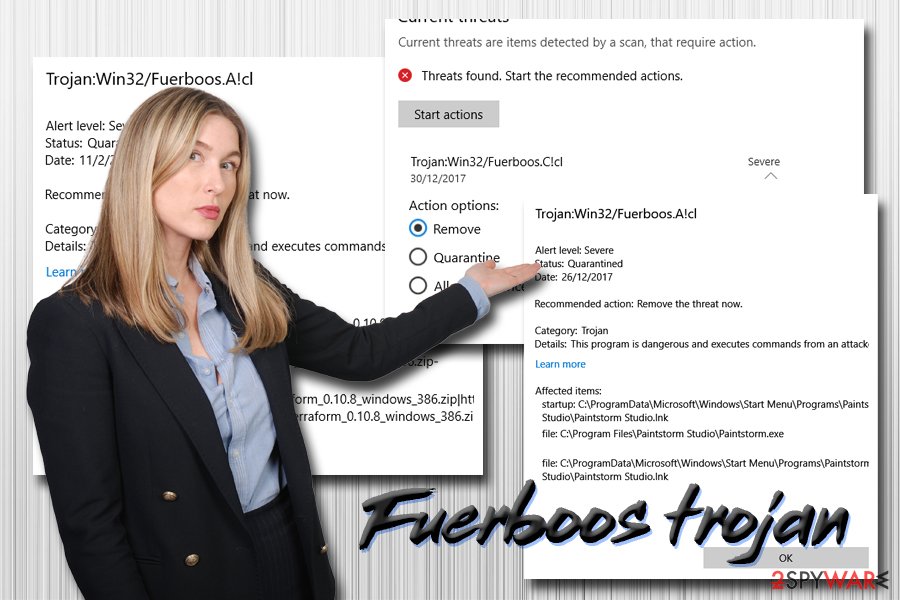 Fuerboos is malware that can indicate trojan, backdoor, ransomware, or other computer infection, although might be a false positive in some cases

Avoid malware by being attentive online

There are many ways to get infected with malware while browsing the internet. While many methods include users initiating the infection themselves, some, more sophisticated malware distribution methods require no user interaction at all. For example, drive-by downloads, exploit kits, software vulnerabilities, and other techniques can inject malicious code without users initiating it. However, in most cases, infections occur due to negligence from the user part.

To avoid malware infections, follow these tips from security experts:[4]

Remove Fuerboos of if it is not a false positive

Before you remove Fuerboos virus from your computer, you need to make sure that it is not a false positive. The easiest way to do so is by downloading and installing alternative anti-malware software, such as SpyHunter 5Combo Cleaner or Malwarebytes. All you have to do is download the security application, install it, and run a full system scan. If any of the AV engines detect the infection as well, it is a high chance that it is not a false positive. If the virus is tampering with the anti-malware application, enter Safe Mode with Networking – we explain how below.

Nevertheless, because heuristic detection deals with brand new and never discovered threats, the best way to find out whether the program in question is malicious is by contacting its developers or flag it up on official anti-virus provider forums.

Once you are sure it is malware, you should proceed with Fuerboos removal as soon as possible to avoid such consequences as identity theft, money loss, or personal data leak.

To remove Trojan:Win32/Fuerboos safely, enter Safe Mode with Networking as explained below:

Finally, you should always think about the protection of crypto-ransomwares. In order to protect your computer from Fuerboos and other ransomwares, use a reputable anti-spyware, such as ReimageIntego, SpyHunter 5Combo Cleaner or Malwarebytes

Your opinion regarding Fuerboos Cancel reply

You can quickly scan the QR code with your mobile device and have Fuerboos manual removal instructions right in your pocket.