.WNCRY virus can become the next most destructive crypto-malware

.WNCRY virus is an alternative name of ransomware, known as WannaCry, WanaCryptor, WanaCrypt0r and Wana Decrypt0r. The name comes after the .WNCRY file extension which is appended to the target files as soon as virus encrypts them. The news broke out about ransomware on May 12, after the Spanish telecommunications company called “Telefonica” reported encountering a cyber threat which demands money.[1] Soon afterward, several hospitals in the Great Britain reported about “Ooops, your files have been encrypted!” alert found on their computers' desktops. Japanese company ”Hitachi”, telecom of Portugal, Renault, FedEx, German train operator Deutsche Bahn AG are also among those that found @Please Read Me@.txt, @WanaDecryptor@.exe, and other files of WNCRY. The main targets are Windows OS users. At the moment, there are more than 230 000 infected computers and digital equipment. By the end of the week, more than 150 countries reported of encountering WNCRY virus. The popularity of this ransomware hides in the EternalBlue vulnerability, specifically, CVE-2017-0145, found in Windows OS devices.[2] The news about this flaw leaked together with the NSA plan to launch cyber attacks against Windows users. Thus, the malware targets all devices with this operating system starting from Windows XP[3]. However, leaked tool would certainly encourage the hackers to improve their malware and launch the second wave of the attack. Luckily, at the moment, you can battle the virus only automatically. Remove .WNCRY virus without hesitation. Updated versions of ReimageIntego orMalwarebytes might come in handy. 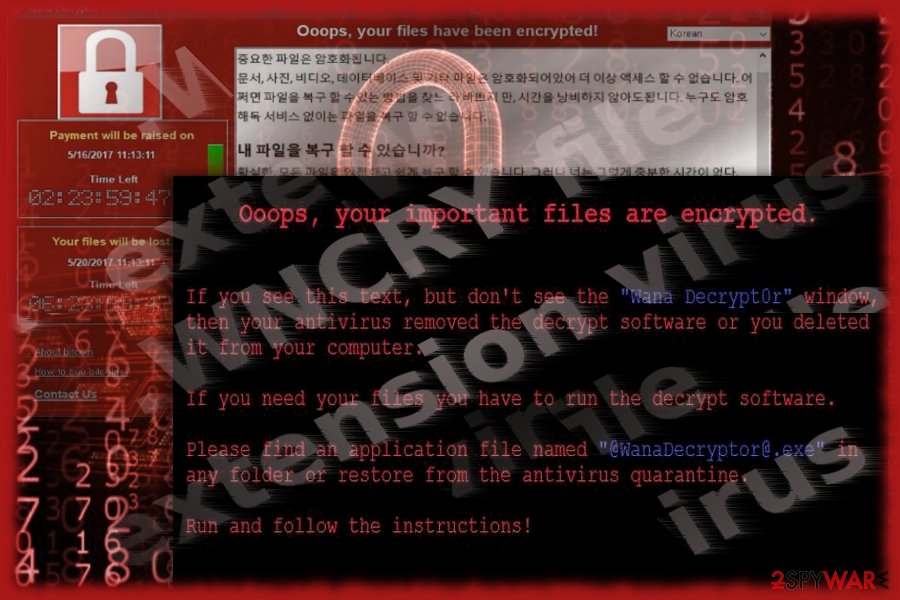 Perhaps WNCRY ransomware-computer worm did not take place if not for the major leak of National Security Agency developed hack tool. Using Windows OS system vulnerability, named EternalBlue, NSA crafted a hack tool. The attack succeeds when a corrupted package is transmitted to one of SMBv1 servers. Nonetheless, it did not take too long for it to get stolen by Shadow Brokers[4]. Thus, this exploit became a goldmine. According to recent reports, the number of infected users is rapidly growing despite the reports about terminated attack. One of the key features of this menace is worm-like features, which enable the virus to infect all devices within the same network. The malware targets all countries without excluding any in particular[5].

Furthermore, the malware is known to use a “mutex” – mutual exclusion object. This element enables several programs or commands to share the same source. Thus, this feature enables the virus to function properly even in offline mode and infect other devices detectable in the same network. It has been observed that the malware employs Global\\MsWinZonesCacheCounterMutexA0 mutex[6]. At the same time, this feature grants the ransomware to detect whether the company is not infected with the virus to avoid disturbance among several versions of the same threat. After the encryption process is finished, it launches the program called WannaCryDecrypter and starts counting down the time. Observing the tendency of similar hackers, subsequent versions of the former threat might be expected in the future. In order to attempt and complete .WNCRY virus removal, it is crucial to know how it spreads. 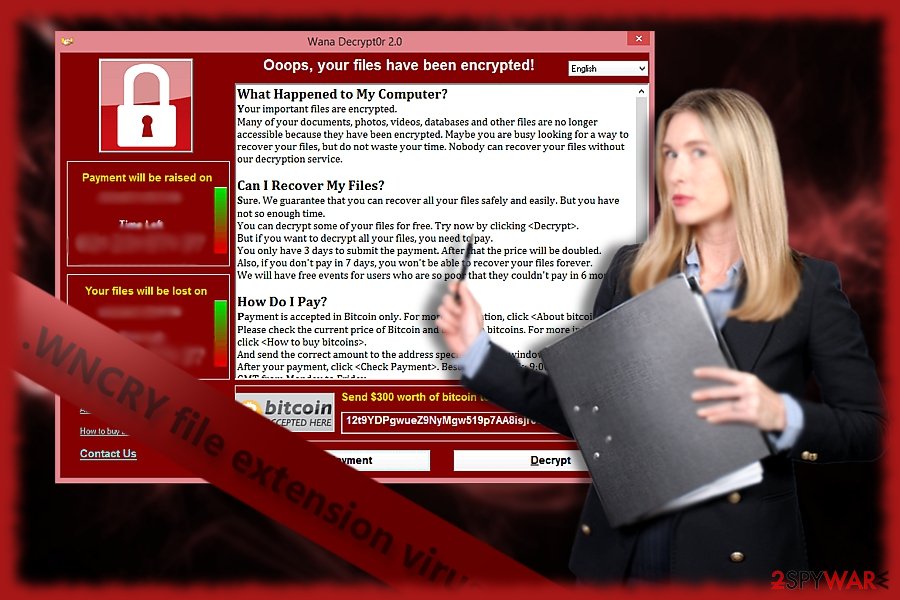 At this rate, WNCRY might reclaim the title of the most dangerous ransomware from Cerber virus soon.

The peculiar distribution campaign of the malware

In comparison with the crypto-malware which is distributed via corrupted spam emails, WNCRY virus is on a new level. In the former case, the malware has few chances to infiltrate computers if users simply ignore the email with embedded macro settings or infected attached file. However, in this case, the malware exploits a vulnerability in Windows OS operating systems which creates a backdoor. Therefore, the malware enters through this flaw and paralyzes the PC by encrypting files. Likewise, the infiltration process is complete. Later on, victims are demanded to pay 300 USD in exchange for their affected data. Needless to say, the chances that you will receive the files even after remitting the payment are low. Since the malware has managed to corrupt thousands of the computers worldwide, the decryption process simply might be interrupted due to the challenge to manage such number of infected users. Certainly, WNCRY file virus cyber campaign is monitored by a wide network of botnets. This fact sparks that perhaps developers of Cerber or Locky “shared” knowledge and joined forces to multiply the scale of the assault. Since the malware possesses a huge potential, a series of SMB exploit kits are suspected to come in handy in further development stages of this malware. At the moment, the viable way to escape this WCRY is to update the operating system to fix the flaw.

If you delay installing Microsoft updates right after they are issued, no anti-virus will help you escape this cyber menace. Check your update history to see whether all updates are successfully installed. In addition, create backup copies in order to avoid devastating outcomes when encountering malware. In case, the virus already occupied your device, launch the PC into Safe Mode and run a computer security application to remove .WNCRY virus. If you are not sure how to do it, follow the instructions below. Note that only after WNCRY removal is completed, you may attempt data recovery. While there is no official decryption tool released yet, be careful not to install the one offered by the hackers.

You may opt for the second method to regain access to the computer.

Guide which is presented above is supposed to help you remove .WNCRY from your computer. To recover your encrypted files, we recommend using a detailed guide prepared by 2-spyware.com security experts.

If your files are encrypted by .WNCRY, you can use several methods to restore them:

Regarding the complexity of this threat, this program may not decrypt all files affected by WNCRY virus, but it is still worth a try.

Since the malware is still under analysis, there are high chances that it deletes shadow volume copies. In order not to pay the ransom, you may try this method as well. However, in this case time is crucial.

Finally, you should always think about the protection of crypto-ransomwares. In order to protect your computer from .WNCRY and other ransomwares, use a reputable anti-spyware, such as ReimageIntego, SpyHunter 5Combo Cleaner or Malwarebytes

You can quickly scan the QR code with your mobile device and have .WNCRY file extension virus manual removal instructions right in your pocket.