If you haven’t heard about the newest version of TeslaCrypt – TeslaCrypt 4.2 virus – then we are glad to enlighten about this new sample of ransomware. This particular threat is programmed for a hideous task – to encrypt personal data and require a ransom in exchange for it. This family of viruses has already built up enough experience of hijacking computers, since hackers restlessly create new versions. It is not expected that this virus will be less treacherous or less damaging. Cyber criminals only introduced minor new features. One of them is the changed design of ransom note. If you happen to get in to the victim list, then it is crucial to remove TeslaCrypt 4.2 virus as soon as possible.

If we take a look at general history of the malware, the virus started off as a relatively minor ransomware version infecting gamers’ computers. The decryption key might have been found in the system. Thus, it didn’t cause major problems. Within time, cyber criminals have improved significantly. The previous version TeslaCrypt 4.0 version uses an elaborate encryption algorithm. Moreover, it didn’t attach any extensions to the encrypted files. Thus, detecting the virus itself became a challenge. Speaking of current version, TeslaCrypt 4.2 ransomware, leaves these files: 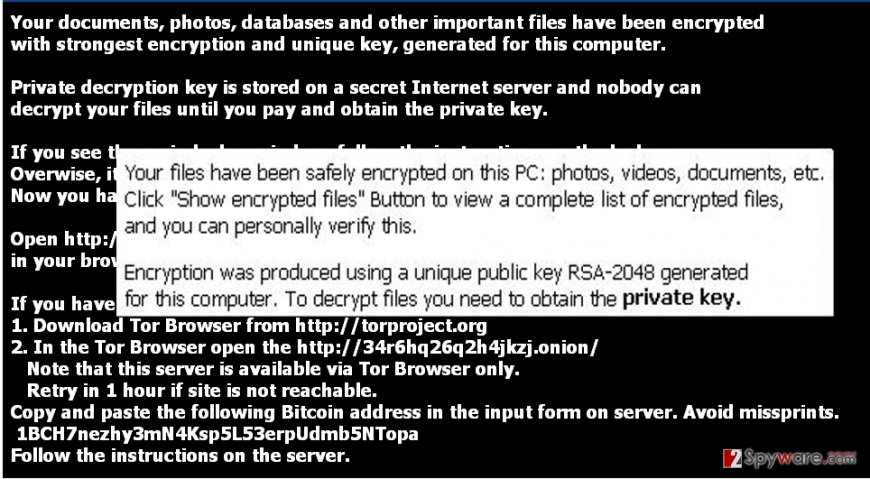 Moreover, the size of the file with recovery instructions has been changed from 256B to 272 bytes. The virus also injects C:\Windows\System32\vssadmin.exe. In comparison with older versions, the current malware deletes copies of the locked files as well.

The distribution ways of TeslaCrypt 4.2 malware

The virus disperses the same way as previous versions. It can infect computers via spam email attachments. In relation, cyber criminals are especially crafty at this. They convince victims into opening an infected email by deceiving them with false invoice notifications, alerts which look like to be sent from governmental institutions. Thus, once users open it, the virus extracts itself.

Moreover, it seems that hackers didn’t try to leave an impression in creating a dramatic design of the ransom note. The file which is entitled as -!recover!-!file!-.txt looks like an ordinary Notepad text file informing of the locked files and providing instructions to recover the encrypted files. Hackers deliver the links to access Tor browser to remit the payment. If your computer was targeted as well, do not foster any hopes to get the data back. From the beginning when the first version was released, cyber criminals have managed to collect a terrific amount of money. However, in May 2016, authors of TeslaCrypt virus shut down the project and released the decryption key, so now you can recover your files for free. Go to page 2 to find out how to recover your files.

Furthermore, you should be aware that TeslaCrypt 4.2 might attack PCs via exploit kits as well. They might come in a different forms: trojans, worms, Java script files. Particularly trojans have an ability to slip into the system without getting stopped by anti-virus software. Thus, it is crucial to have a powerful anti-spyware program. Now let us proceed to TeslaCrypt 4.2 removal. You can use Reimage Reimage Cleaner Intego for that.

First of all, focus on deleting TeslaCrypt 4.2 virus permanently. The best choice would be to install an anti-spyware program which is specifically designed for dealing with malware and ransomware. It can also detect trojans. Once you remove TeslaCrypt 4.2, use this TeslaCrypt decryption tool to recover your files. You should think about alternatives to store your data, since the only reason your can decrypt TeslaCrypt is because it has released its master key. That means other ransomware threats are still extremely dangerous, and if one of them would slither into your computer system, your files might be lost forever. DVDs, USB sticks, online data storage domains can be perceived as possible options to store backups. However, note that ransomware also infects data storage devices if they are plugged into the computer at the time of infection. That is why updating your cyber security programs is a necessity.

Finally, you should always think about the protection of crypto-ransomwares. In order to protect your computer from TeslaCrypt 4.2 and other ransomwares, use a reputable anti-spyware, such as Reimage Reimage Cleaner Intego, SpyHunter 5Combo Cleaner or Malwarebytes

Your opinion regarding TeslaCrypt 4.2 Cancel reply

You can quickly scan the QR code with your mobile device and have TeslaCrypt 4.2 manual removal instructions right in your pocket.