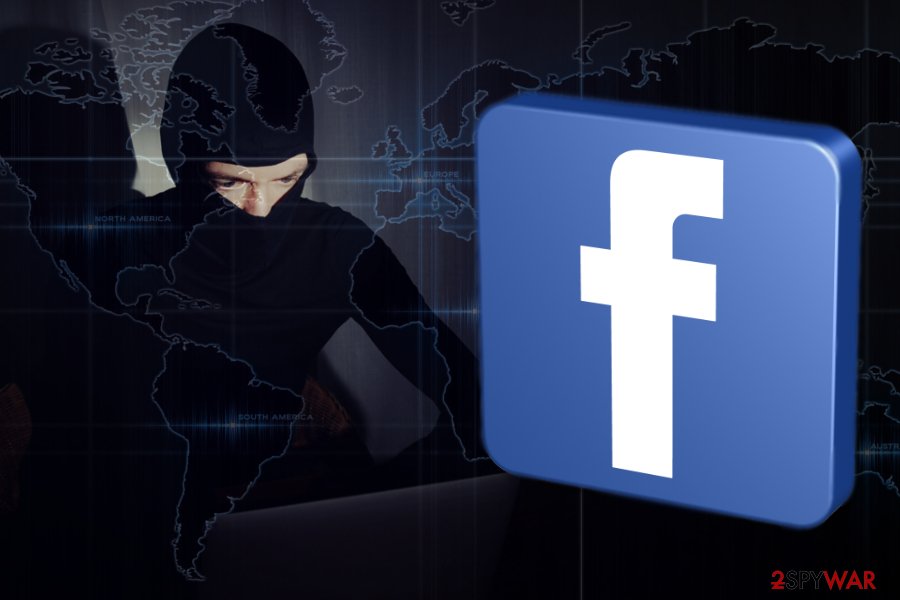 Facebook scams - a term used for describing fraudulent activities on the social network.

Facebook scams are a type of cyber fraud that aims at social network users. Scammers created various hoaxes that are being spread on Facebook’s News Feed and Messenger. Some of them ask to share posts about upcoming paid services or disagreements to use their personal data in order to create chaos and spread the misleading news. Others spread malicious links redirecting to infected websites and ask to install malware in the form of plugins. Also, you can find various shopping, giveaway, lottery and fundraiser scams too. However, the main purpose of them all are swindling the money or personal information.

Facebook scams emerged soon after the popularity of the social network reached great heights. Security specialists warned about various different types of hoaxes that are spreading online. However, we have divided them into four categories based on their purposes:

Therefore, these cyber threats might pose a danger to your privacy and computer’s security. If you were tricked to install some suspicious application or plugin, please scan your device with Reimage Reimage Cleaner Intego, Malwarebytes or another anti-malware to check if your PC was not infected. In case of the attack, you need not only to remove Facebook scams but change your password too. 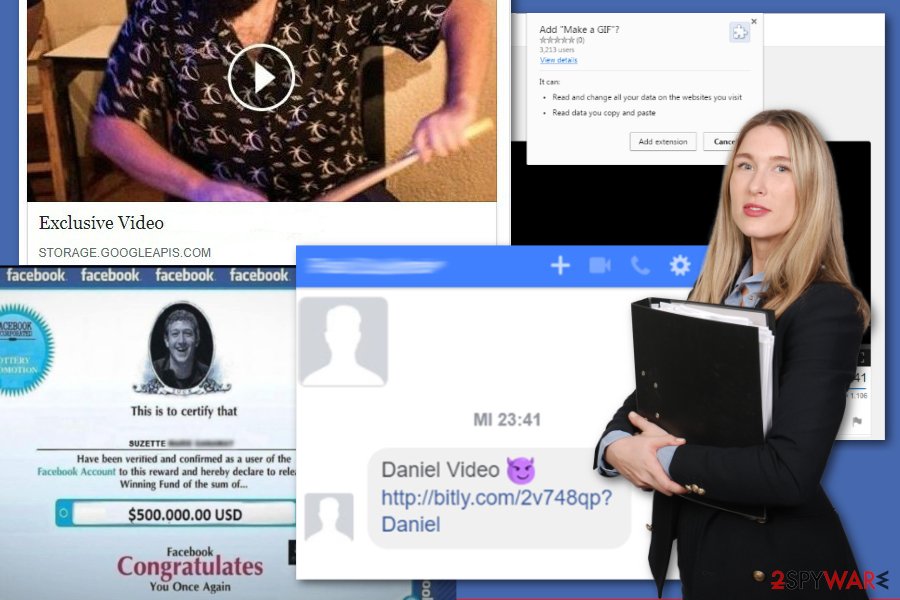 Facebook scams are a group of fraudulent apps, ads, and messages that aim to steal user's personal information, money or infect with malware.

It’s hard to find a Facebook user who hasn’t received a message telling about paid services. Such Facebook scam has been spreading since 2012, but the social network is still free of charge. However, the following message occasionally keeps spreading via personal messages:[1]

“Now it's official! It has been published in the media. Facebook has just released the entry price: £5.99 to keep the subscription of your status to be set to “private”. If you paste this message on your page, it will be offered free (I said paste not share) if not tomorrow, all your posts can become public. Even the messages that have been deleted or the photos not allowed. After all, it does not cost anything for a simple copy and paste.”

Of course, there are other variations of this message. However, the point is that this information is untrue. Hence, there’s no spam your friend’s mailbox with useless and misleading information.

A similar hoax has emerged approximately in 2015. However, instead of receiving a personal message, this time you might be encouraged to post a specific message in order not to let Facebook to use your information:[2]

As of January 4th, 2015 at 5pm Central standard time. I do NOT give Facebook, or any entities associated with Facebook, permission to use my pictures, information, or posts, both past and future. By this statement I give notice to Facebook that it is strictly forbidden to disclose, copy, distribute, or take any other action against me based on this profile is private and confidential information. The violation of privacy can be punished by law (UCC 1-308-11 308-103 and Rome statute). NOTE: Facebook is now a public entity. All members must post a note like this. If you prefer, you can copy and paste this version. If you do not publish this statement at least once it will be tactically allowing the use of your photos, as well as information contained in the profile status updates. DO NOT SHARE. You MUST copy and paste to make this your status. I will leave a comment so it will be easier to copy and paste!!!

Similar translated messages are spreading all over the world in different language. Researchers from dieviren.de[3] tell that similar hoax spread in German, Spanish, French, Lithuanian, and many other languages too. It’s hard to tell why this ridiculous scam emerged at first. If you are concerned about your privacy, you should read Facebook’s privacy policy, check your account settings and think what personal information is worth sharing on Facebook.

Another type of Facebook scams aims at users who are willing to purchase some clothes or goods for small prices. Unfortunately, the social network has some flaws in their ads services, so scammers can promote their fake e-shops quite easily.

Some fake e-stores steal pictures from legitimate ones and offer to purchase clothes for low prices. In reality, people receive terrible items that do not look like the ones from the photo. In some cases, victims do not receive their order at all. Needless to say that they do not have a refund too. 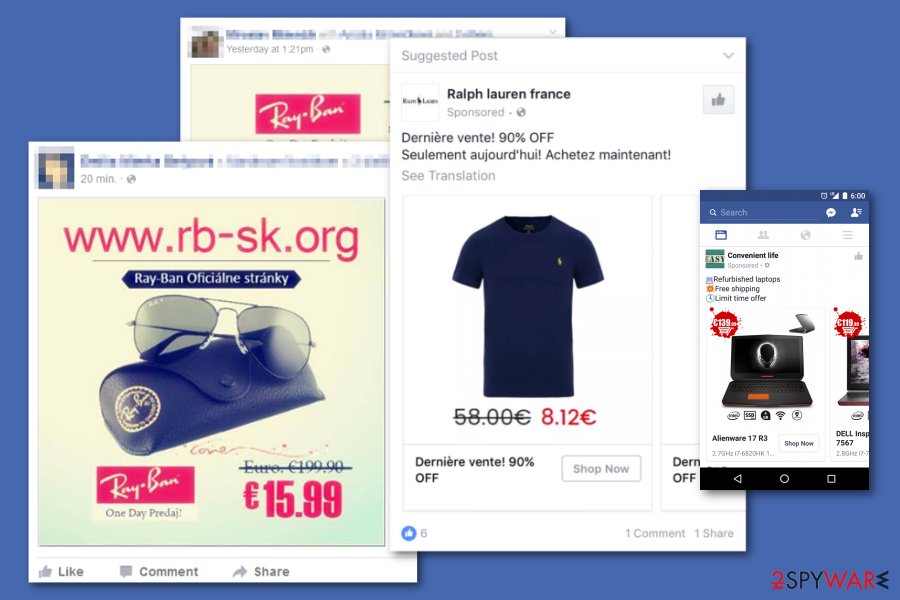 Other fake Facebook ads promote computers or other gadgets at very low prices. The Facebook forum is full of users’ reports about fake stores like hxxp://laptopmall.co.uk/ or hxxp://iepcsale.com/ from which they have ordered laptops, but never received them:

I have actually ordered one of the cheap laptops from hxxp://www.hiusmla.com/index.php?route=common%2Fhome
I have made the payment as well.
I received auto-mail confirming my payment success (refer the picture attached).
But have not heard back since.
I can claim my money back through my Bank, but i am just seeing how they really operate.
I am going to get prove that they are a scum or what.[4]

We want to warn to be careful with ads. If you see a product available at three or four times lower price, you have to check the information about the retailer. Look for the company name, check its credibility by looking for the information online and reading customer’s reviews.

Winning the lottery is always exciting. However, people always forget that in order to get a chance to win something, you need to enter some competition first. Though, scammers are aware that people do not pay attention to this important fact. 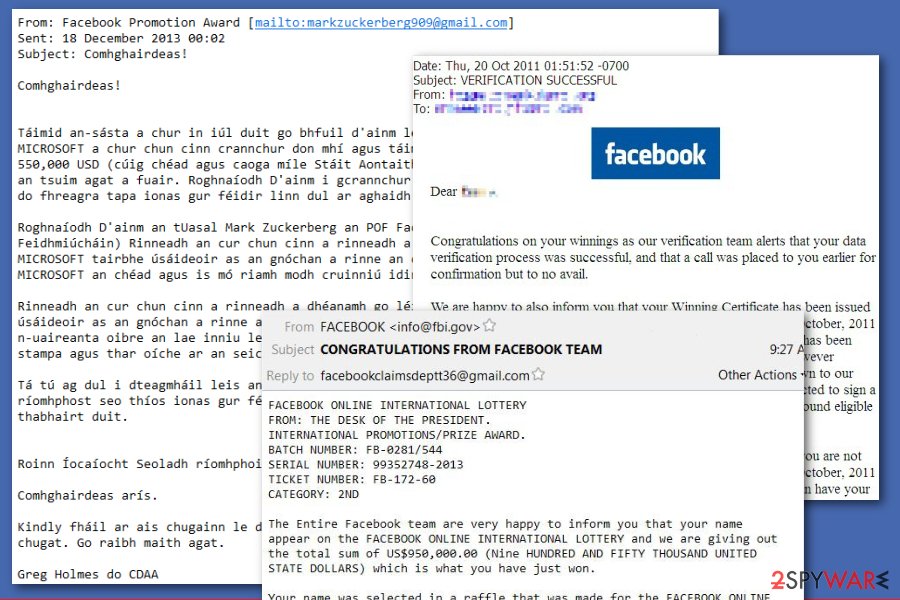 The majority of Facebook lottery scams are spreading via email. These letters look like sent from Facebook and seem legitimate. The scheme usually works in a way that a “lottery winner” has to contact the “agent” who will ask to pay a specific sum of money in order to claim the prize. [5]Nevertheless, this does not seem logic; many people fall for the hoax and follow ridiculous rules due to the excitement of winning a few hundreds of thousands of dollars.

According to the victims, scammers even use fake identification (ID) to trick people that they are actually working in Facebook.[6] However, we want to point out that any lotteries are not held by the company, thus if you receive such email, delete it immediately. 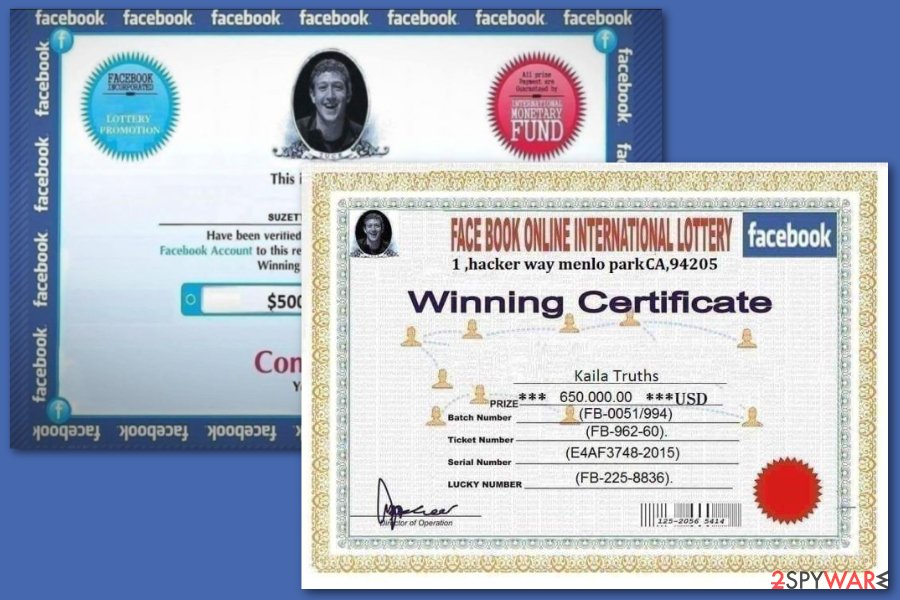 In April 2018, another Facebook scam has been noticed spreading on the social network tricking people that they won in the lottery too. Dubbed as Mark Zuckerberg scam,[7] the hoax has been held by using fake accounts.

According to the New York Times, there are about 205 Facebook accounts that impersonate Zuckerberg. Therefore, scammers send messages to victims telling that they won a few hundreds of dollars. Those, who believed that they received a personal letter from the creator of the social network, were asked to send $200 in iTunes gift cards or/and transfer some money. Therefore, this hoax was used only for swindling the money from Facebook users.

Another type of Facebook scams usually spread via fake video links on both Messenger and News Feed. Various versions of Facebook virus suggest watching different shocking or personal video. Usually, the link is followed by sayings: 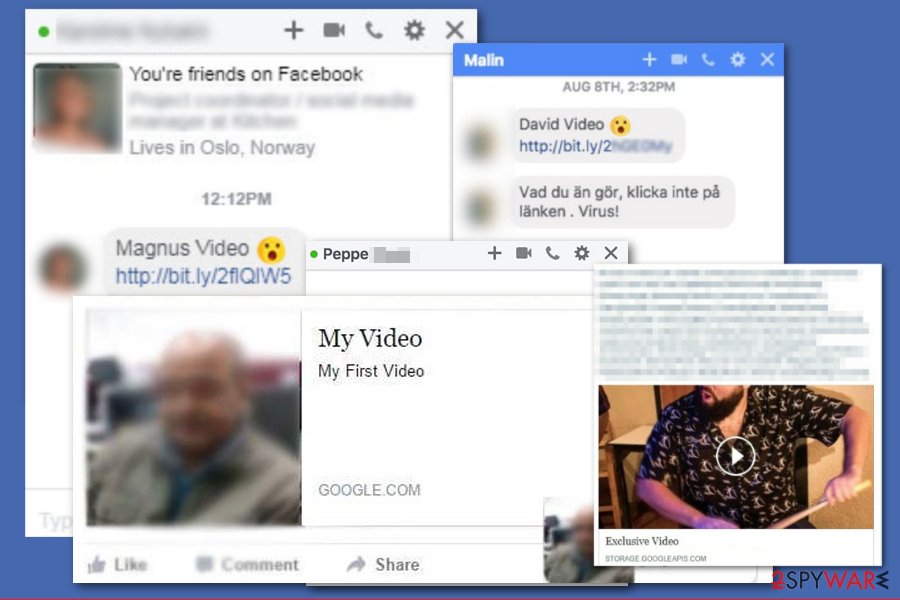 Facebook virus has different forms and shapes but usually spreads as a malicious video link.

Video links often include a profile picture of the victim and his or her full name. Once clicked, the link redirects to a malicious website that impersonates YouTube or other popular video streaming sites. However, users receive a prompt asking to install a plugin or update needed to access the content. 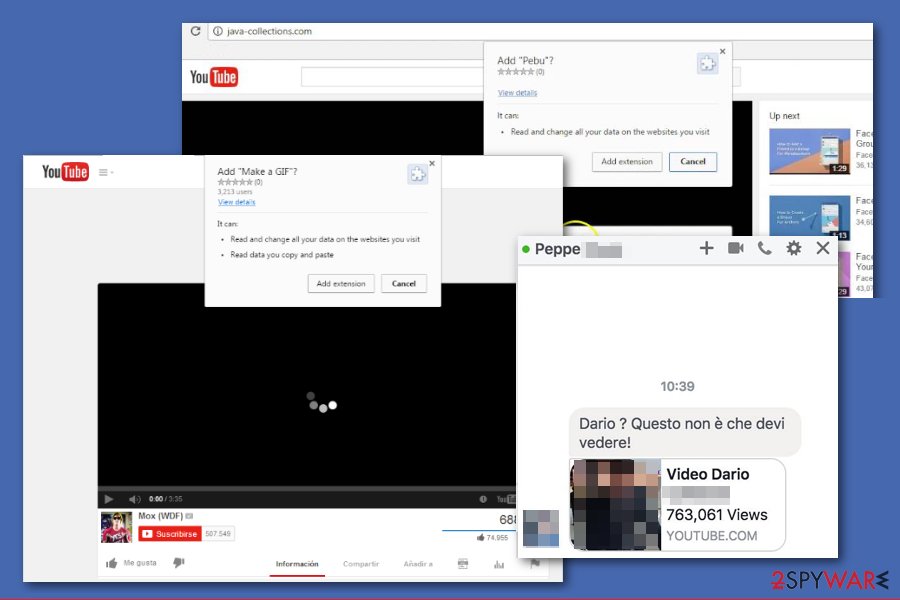 If you have clicked on a strange video link sent from a friend and installed a suspicious extension, you need to remove Facebook scam immediately. Uninstall these add-ons from the browser and scan the device with anti-malware software. After that, strengthen your Facebook account’s security by changing your password.

There’s a way to spot and avoid scams on Facebook

The variety of scams makes it challenging to find a cure for stopping these activities on the social network. However, the main tip is to be critical and do not rush sharing or clicking content that everyone seems to be spreading. Flooded News Feed should motivate you to look up for the information about what is going on out there.

Generally speaking, Facebook scams removal is impossible. Criminals are always looking for new ways to reach potential targets, and a worldwide social network is definitely an excellent place for that. No matter how hard the company works against cybercrime, crooks keep learning new tricks. So, there’s no doubt that you will see some fake links, posts or other hoaxes on Facebook.

The most important task is to stay away from this content. However, if you were tricked or possibly installed something malicious, you have to check your computer’s or smartphone’s state. If your account was hacked and you keep spreading malicious messages or posts, you need to remove Facebook scams using anti-malware software.

Once you scan all devices you used for accessing Facebook with Reimage Reimage Cleaner Intego, Malwarebytes or another anti-malware, change your password and look through your account settings. If you see some unauthorized access, disconnect from these devices. Also, remove all unknown third-party apps that your account is associated with.

You can quickly scan the QR code with your mobile device and have Facebook scams manual removal instructions right in your pocket.