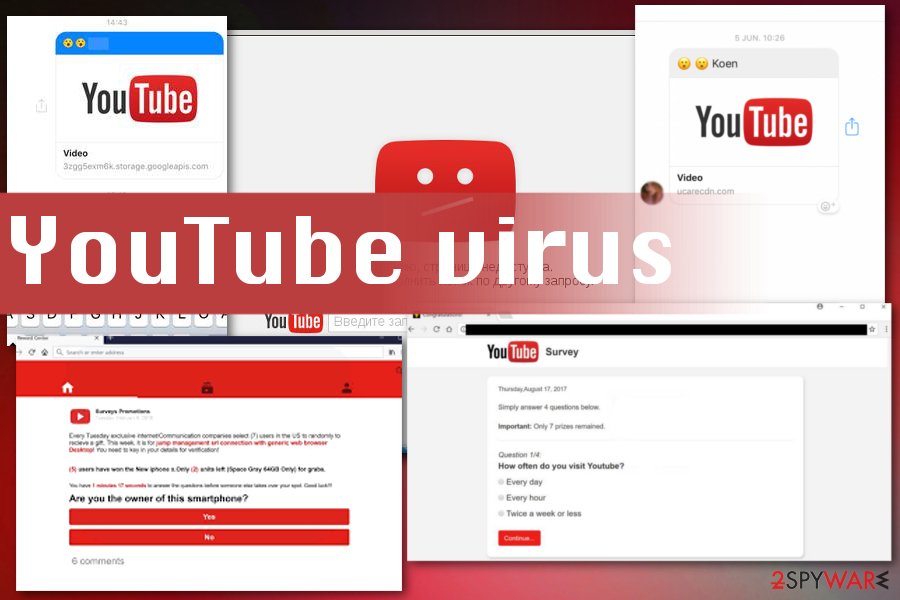 Virus on Youtube can appear in different forms that have been spreading adware, browser hijackers and other cyber infections. YouTube virus is the type of malware that includes various versions of cyber infections that can be associated with this social media and video-creating website. A platform is a popular network that most of the PC users have already heard of and are actively using on the daily basis.[1] However, because of this popularity, YouTube is constantly fighting against malicious actors who have been actively misusing well-known names like Pinterest or Facebook to create malicious campaigns used to infect unaware users with malware. Beware that, because of virus on YouTube, you can get infected with an adware, browser hijacker or even ransomware. You should be aware that there are too many imposters online to believe every YouTube advertisement or pop-up. If you happen to notice that such ads keep appearing, check the system for Youtube virus immediately.

YouTube virus is the definition of various malware forms misusing the name of the video broadcasting service in one or another way. There are numerous cyber threats that you can get infected after clicking on a malicious link presented in the ad, fake email message, etc. However, the main thing here is to note that the official YouTube site is NOT related to these viruses in any way.

Usually, users are attacked via identical to the original but fraudulent YouTube site.[2] However, besides this way of attack, there are other ways to get infected, including fake email messages, fake links, and other means of distribution that can end up with such malware:

Note that the official website contains HTTPS indicator and it does not ask you to update Flash Player or install any additional codecs. If you are convinced that you are in a wrong version of the official domain, remove YouTube virus. Reimage Reimage Cleaner Intego or SpyHunter 5Combo Cleaner might be helpful in this situation. Before we discuss elimination methods, let us review dominant YouTube malware cases.

Perhaps the most efficient samples illustrating this virus type are all those pop-up and redirect viruses that cause commercial content continuously delivered to your screen. With the popularity of social media, these fake YouTube site messages occur on Facebook or Messenger.

In either case, a fraudulent video link is distributed among the Facebook community. In order to persuade gullible users to open the link, the message contains “[receiver’s name] video” comment. Recent cases of the scam include the profile picture of a receiver.

Furthermore, after clicking on the link which indicates a random site or even supposedly YouTube URL, users are directed to a fake YouTube site. In order to play the video, users are expected to enable a specific extension or download a codec[3]. Some malware cases ask victims to install dubious applications. Such action would further download adware into the operating system.

There are tons of different adware infections misusing the name of YouTube to trick users into infecting their machines with such viruses as these examples:

As ridiculous it may sound, in fact, there were cases of the so-called YouTube ransomware. For instance, in June 2017, a screen locker pretending to be YouTube crypto-malware was spotted. It alarmed users that they have violated the YouTube law.

In order to regain access to the website and the device as well, they were supposed to enter the code. Fortunately, experts have found the passcode – law725. Fortunately, the threat turned out to be a mere prank rather than a menacing virus. Due to the popularity of the official domain, the probability of real ransomware should not be excluded. 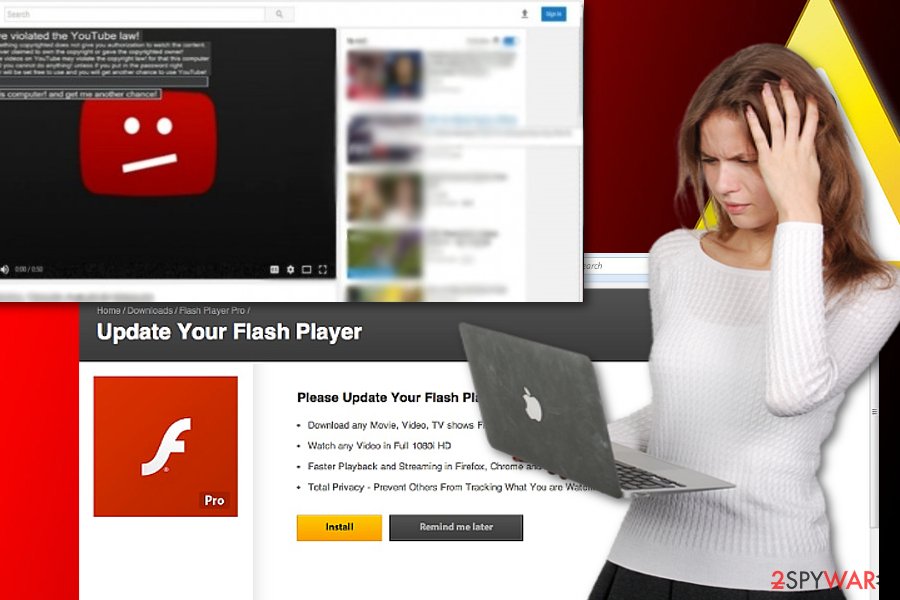 YouTube virus is the malware that has been targeting the virtual community with the help of new forms since 2015.

This is by far the most common form of YouTube virus. There have been multiple instances when users encounter a pop-up message urging to update Flash Player in order to play a video on the site.

Unfortunately, due to a persuasive appearance of such alert, credulous users install the fake alert only to discover the presence of frustrating adware, data-stealing trojan or even real crypto-malware. Bear in mind that your operating system notifies you about the outdated Flash Player once you log in to the computer.

As every popular website has its evil twin so does YouTube. Malware developers have created dozens of fake websites which are based on a single trick – mistyping of the word “youtube.” Since it is common among users to misspell the name of a domain, they often accidentally get redirected to a phishing site. Various scams use the name of YouTube to get more views and victims, for example, YouTube Reward Center.

It may also offer to install a dubious extension like Youtube Download Manager. Otherwise, such domains may be a perfect haven for hidden crypto-coin miners[4]. They are not visible to ordinary users. While they watch videos on a fake website, the malware mines bitcoins or other crypto-currency. In short, due to them, you might notice that the website drains an enormous amount of CPU resources.

In that case, you will need to perform Youtube virus removal as soon as possible. In order to avoid the encounter with crypto-coin miners, install anti-miner plug-in, for instance, AdBlock or No Coin or any other, but choose wisely as there are also fraudulent imitations of such extensions as well. 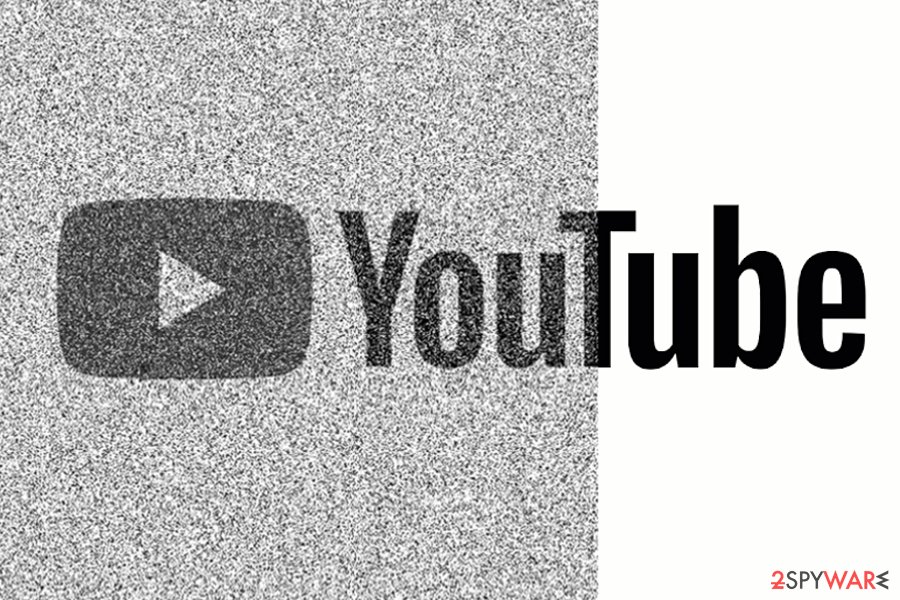 In the middle of January 2018, security experts discovered a new version of YouTube virus. This time, hackers were using YouTube ads to run crypto-mining code on a victim's computer. As soon as the ad was clicked, the code was enabled and started using a computer's CPU and electricity power to mine cryptocurrency. According to the latest reports, it is a totally new form of abuse.

Ninety percent of malicious Youtube ads were using Coinhive miner that helped cybercriminals use other users’ computing power to illegally mine Monero and generate profit. Coinhive was created to let website owners operate a legal scheme to generate this currency. However, cybercriminals took only several months to learn how to abuse Google’s DoubleClick platform and Coinhive to utilize them for their personal gain.

Google – the owner of Youtube – responded to cyber attacks on their servers immediately. According to the announcement from the Internet giant, ads were blocked in less than two hours, and the malicious actors were quickly removed from its platforms.[5]

Depending on what type of virus you encounter, malware elimination, and prevention measures differ. In order to avoid adware or malicious redirects, make sure not to install any software updates from random pages. Also, choosing Advanced or Custom options during the installation can give you the opportunity to remove unwanted applications from the download list.

Regarding social media message virus, do not click on video links or download an image file which is supposedly sent by your friend. Inquire the sender again to verify the content of such message. Note that a genuine video link often generates a video image with the screenshot of the video content.

If you mistyped URL name and found yourself in an odd website, exit it right away and scan the browse. You should also update your browser as exploit kits, which target certain browser vulnerabilities, may also cram you with fake software-promoting pop-ups or even lead to more severe malware attacks.

Whether you are dealing with YouTube redirect virus or got to a counterfeited web page, scan the browser and the PC with an anti-malware utility. Update it before scanning so all new threats can be indicated.

Automatic YouTube virus removal is also recommended when you are dealing with a screen locker or any other more severe cyber threat that is not only affecting your browser with pop-ups. This solution also improves the performance of your device since it helps to clean the computer fully.

Later on, reboot the system into Safe Mode, if necessary and repeat the scan procedure. Lastly, it is recommended to reset browser settings. Such action will remove YouTube virus scripts, cookies, and other web components. Note that Youtube malware targets every computer user, regardless whether you are a British, Portuguese or Chinese.[6]

To remove Youtube virus from Windows, make sure you scan the system with updated anti-spyware to find all components that belong to this malware. However, you can also uninstall these components with the following guide.

Mac OS users are not immune to Youtube malware as well. To get rid of it, make sure you carefully scan your computer with anti-spyware or use the guide to uninstall related programs that are malicious.

Once these steps are finished, Youtube should be removed from your Microsoft Edge browser.

You may also need to remove YouTube virus from the browser manually.

You can quickly scan the QR code with your mobile device and have Youtube virus manual removal instructions right in your pocket.