Goo.gl – a legitimate URL shortening service which might be exploited by criminals 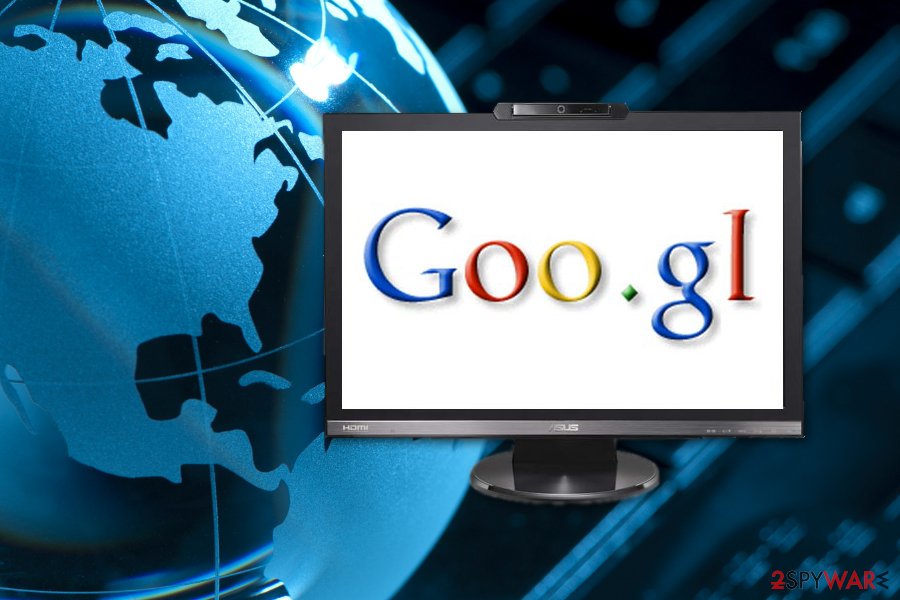 Goo.gl is a popular link shortening service developed by Google. Ability to shorten the link and hide the real URL is really appreciated by cyber criminals who have been already noticed spreading malicious links via Skype, Facebook, and Twitter. Clicking on such link leads to infiltration of malware.

The so-called Goo.gl virus is a trojan horse which is typically spread via malicious links via popular social networks. Malware spreads with the help of compromised accounts. Therefore, a potential victim receives a dangerous link sent from her or his contact.

Criminals use social engineering techniques to trick users into clicking a malicious Goo.gl link which typically redirects to a malware-laden website that triggers a download of the trojan horse which might be responsible for performing these activities on the affected device:

To perform these activities malware might use lots of computer resources. Hence, the first sign of the infection is sluggish computer’s performance. Additionally, you might lose access to your files, receive lots of ads while browsing the web, etc. If you can recognize these symptoms after clicking a malicious link, you might need to remove Goo.gl virus.

Goo.gl virus removal should be performed with a reputable and powerful anti-malware software to make sure that all malicious components are wiped out entirely. For this task, we highly recommend using ReimageIntego.

Criminals took advantage of Goo.gl service in a couple of versions of Skype virus. The virus spread links via Skype messages on behalf of the user. Typically, these messages include a weird text or emoji followed with a shortened link, for instance:

Additionally, Goo.gl Skype virus might also inform about the discovered picture or video of you.[1] Though it’s a clever social engineering technique that triggers curiosity and user’s willingness to click the link and see what photo may have been taken of her or him.

However, the malicious links usually lead to a suspicious file-sharing website which might automatically download .zip folder that contains malicious software. However, some reports tell that these links installed unknown .exe files as well.

These files are designed to launch malware installation and execution procedure on the affected system. If you clicked on a suspicious link or your contacts reported receiving questionable links sent from your account, you should check your computer immediately with a reputable anti-malware software and remove Goo.gl Skype virus from the device. Additionally, changing your Skype password is needed too. 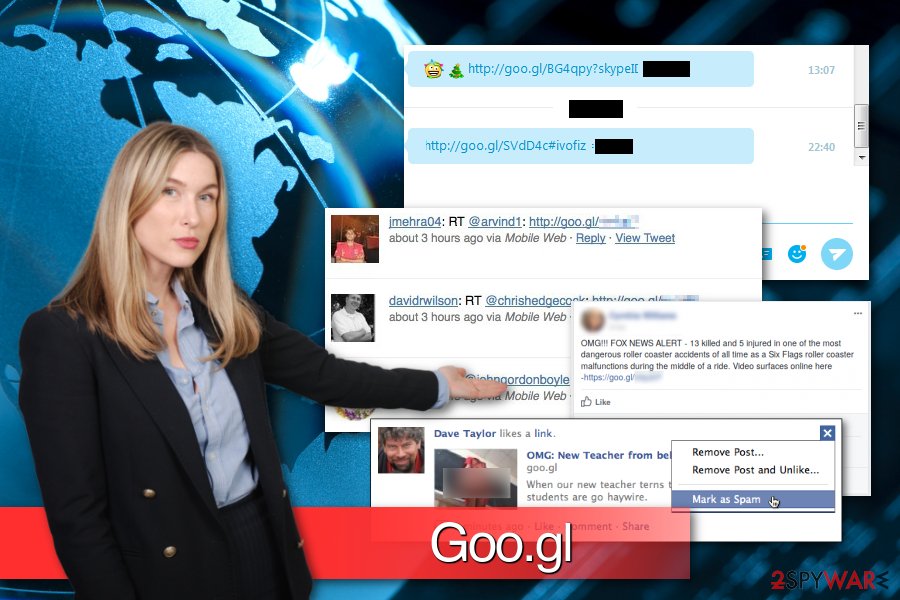 Goo.gl virus is a Trojan horse that spreads malicious links on Skype, Facebook, Twitter and other social networks.

Malicious Goo.gl links have been spreading on the world’s largest social network at least since 2011. This version of the Facebook virus might spread via rogue applications and private messages. Typically the shortened link is followed by intriguing message or comment.

The message received via Messenger might ask you to watch a video or picture of you. However, clicking the link redirects to a malicious website that asks to install a JavaScript or Flash updated necessary for playing the video. However, in this way, users lets malware on their devices which can compromise their security.

Meanwhile, compromised apps might pretend to be news site apps that deliver shocking news about murdered people or click-bite headlines about celebrities.[2] A several years ago, the Goo.gl Facebook virus was spreading fake apps that allowed seeing profile viewers or “stalkers.” However, you should stay away from the applications that give extended features of Facebook that are not originally created by the company.

In 2010, the first reports about Twitter Goo.gl virus appeared.[3] Back then malware spread on a mobile version of the Twitter via malicious shortened links:

However, other obfuscated links were spotted during the time as well. For instance, one of the versions of the Twitter virus was spreading fake antivirus work. The obfuscated link redirected to a rough antivirus program download site.

When malware was dropped on the system, the malicious link was continued spreading on the social network. Goo.gl Twitter virus not only can perform various activities on the affected machine but compromises Twitter account.

Tips to avoid the virus

We have already explained that malware spread with the help of shortened links. It might seem that it’s hard to identify safe and insecure Goo.gl link. However, you can always check it with online scanners if you are confused. Though, in most cases, you can suspect that the link is dangerous if:

Security specialists from semvirus.pt[4] also suggest asking the sender to confirm that she or he sent the link. Usually, users are not aware that their accounts are compromised. Hence, you will not only protect yourself from a malware attack but also will help a person to learn about the cyber infection.

Delete Goo.gl virus from your computer and protect your social networks accounts

To remove Goo.gl virus from the device, you have to scan the system with a reputable anti-malware software, such as ReimageIntego or Malwarebytes. It’s unknown what malware was installed on your PC once you clicked on the malicious link. Therefore, full system scan with antivirus is a must to wipe out all cyber threats.

After automatic Goo.gl removal, you have to change Facebook, Skype, Twitter and other account passwords. It helps to protect your sensitive information if malware stole some of the credentials.

If malware prevents from accessing or running security software needed for virus removal, reboot the PC to Safe Mode with Networking:

Finally, you should always think about the protection of crypto-ransomwares. In order to protect your computer from Goo.gl and other ransomwares, use a reputable anti-spyware, such as ReimageIntego, SpyHunter 5Combo Cleaner or Malwarebytes

You can quickly scan the QR code with your mobile device and have Goo.gl virus manual removal instructions right in your pocket.