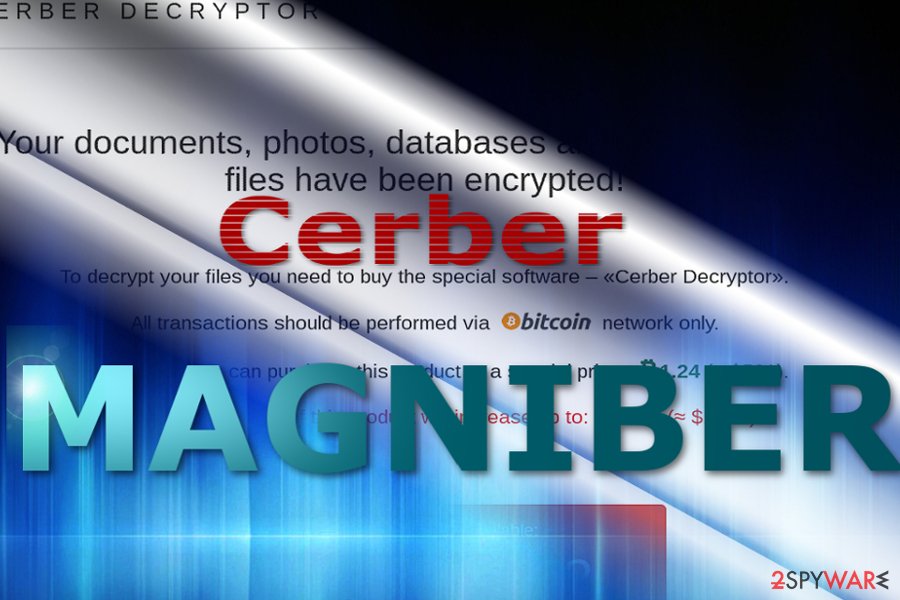 Magniber is dangerous crypto-virus that first showed up in October 2017. Its name originates from two words: Magnitude (ransomware was spread using Magnitude exploit kit) and Cerber. Malware uses AES-128 to lock up data and ads file extension consisting of 5 to 9 letters. It then demands a ransom of 0.2 BTC, which later doubles to 0.4 BTC. Although South Korean cybersecurity researchers managed to create a decryptor for most variants of Magniber virus, it came back stronger in July 2018 with updated obfuscation techniques. While it was targeting Korean users exclusively, its spectrum has been expanded with the ability to encrypt files of Chinese and Malaysian victims. The ransomware adds .dyaaghemy file extension and, at the time of the writing, is not decryptable.

Magniber cyber threat was noticed spreading via Magnitude exploit kit. This exploit kit has been used by Cerber virus. However, it’s not the only similarity to the infamous ransomware.[1].

Originally, the crypto-virus targeted South Korean computer users only. However, it is now been spotted in other Asian countries – China and Malaysia. Interestingly, the malware terminates itself (by deleting its ping.exe[2] executable file) if it detects other than the Korean, Chinese or Malaysian language.

The malware is using AES cipher. Before the end of March 2018, it was almost impossible to decrypt files without AES key. However, South Korean cybersecurity experts managed to crack the code for most of the Magniber ransomware versions.

This fact sparks suspicion that North Korean hackers might have created the malware. Such an assumption is not baseless taking into account the cyber capabilities of this country[3] However, this theory still needs evidence.

Magniber ransomware is designed to encrypt files and demand to pay the ransom. Malware has been updated several times and the latest updates were spotted in June 2018.[4] This version adds .ndpyhss file extension and drops a ransom note README.txt.

Each of the new variant appends different file extension. Currently, malware locks files with these suffixes:

After data encryption, malware offers to buy My Decryptor to restore corrupted files. At the moment, it costs 0.2 bitcoins ($1140). It will double to 0.4 after five days. Do not remit the payment as the malware is decryptable. Instead, concentrate on Magniber removal. ReimageIntego or Malwarebytes is a reliable security software that can help in a quick malware elimination. 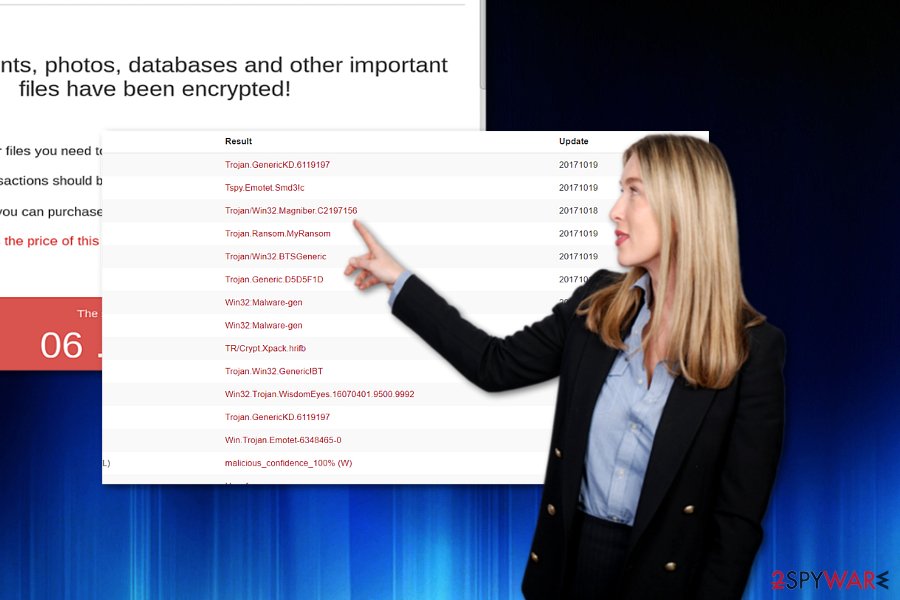 Magniber virus is said to be the latest version of Cerber.

Simone “evilsocket” Margaritelli, the researcher for mobile security company Zimperium, managed to create a decryption tool that might help to restore files after the Magniber attack. However, in order to use it, victims have to know the AES key.

According to the researcher, the decryptor should work if victims were infected from a non-Korean IP address or they cannot connect to Command & Control (C&C) server. These people should know the hardcoded key and IV which should be included in the ransomware’s code.

At the end of March 2018, security researchers from AhnLab released multiple decryptors for different types of Magniber virus. The recovery tool functions based on an encryption bug that was left out by hackers.

Below you can see the table showing which versions of Magniber ransomware can be now decrypted:

Though it uses the same payment site, its source code seems to be much less elaborate than Cerber‘s. Therefore, it gives hope that the virus can be decrypted[6]. After infiltrating the system, the malware encodes data and appends either .ihsdj or .kgpvwnr extension. Furthermore, it will open the ransom file called as READ_ME_FOR_DECRYPT_[id].txt file.

It contains the typical text explaining that all documents, photos, and databases have been encrypted. The very manner of the written text slightly differs, though, in contrast to the original Cerber’s note.

On the other hand, Magniber crypto-malware directs users to a subdomain, containing the victim’s ID, of the payment site. It is divided into four sections: Homepage, Support, Decrypt 1 file for FREE and Reload content page.

The crypto-virus also evades certain directories when looking for encryptable files. As common for ransomware, it skips Program Files, Recycle Bin, local settings, and certain AppData subfolders. Furthermore, the malware has the ability to change payment bitcoin address if it identifies an URL with a different victim’s ID.

Magniber ransomware is giving for its victims five days to pay the ransom. Otherwise, it will double

Security researchers from Malwarebytes Labs published[7] a detailed technical report of a new sample of Magniber virus. According to experts, the ransomware has undergone some tremendous changes during the past year and came back even more powerful.

The first significant change in the code of the virus is the capabilities of the infection. The new Magniber now targets users outside of South Korea, i.e., the virus deploys its payload whenever it detects South Korean, Chinese (Macau, China, Singapore) or Malay (Malaysia, Brunei) keyboard languages. Thus, researchers speculate that it will expand even more, and users around the world could be affected by this threat.

The new Magniber version is utilizing Magnitude exploit kit makes use of Internet Explorer zero-day vulnerability (CVE-2018-8174), which was first discovered in April this year, and patched next month. Therefore, users who are updating their browsers on time should be safe from the new Magniber virus attack. Furthermore, the virus is rather unsuccessful when it comes to other modern day browsers, such as Google Chrome or Mozilla Firefox.

Magniber ransomware no longer relies on the Command & Control server or the hardcoded key, as well as uses improved obfuscation methods. The enhanced version of the virus encrypts files by adding .dyaaghemy appendix, and as of now, this variant of Magniber is not decryptable.

The new Magniber ransomware came back with stronger and improved version, which is not limited to South Korean users anymore

As previously mentioned, at the moment, the malware is spread with the assistance of Magnitude exploit kit. It targets a particular CVE-2016-0189 vulnerability in Internet Explorer[8]. This flaw has been fixed already. Thus, if you are using the browser, make sure it is updated.

If the exploit kit detects the vulnerability in a user’s browser, the kit directs them to a fraudulent website which is customized according to a victim geolocation. Such sites are likely to include a link. Activating it would download the malware and begin Magniber hijack.

At the moment, the malware only targets South Korea, but soon it may extend its activities in other East Asian countries, for instance, Japanese[9] sites. Thus, make a rush to remove Magniber.

Eliminate Magniber virus and then proceed with the file recovery

Though the malware tries to persuade that it is the latest Cerber version, differences in the operation mode and source code trigger speculations whether the developers are the same. Though security experts state that the malware is Cerber in fact, less elaborate source code contradicts such statement.

In any case, the malware elimination should be your top priority. Do not waste time on meddling with the virus manually. Install a security tool, for instance, ReimageIntego or SpyHunter 5Combo Cleaner, to remove Magniber virus. The virus might prevent you from starting security software. In that case, boot the system in Safe Mode and launch the program. Below instructions display further instructions on how to do it. Only when Magniber removal is complete, proceed to data recovery.

If, by any chance, you cannot boot the device into Safe Mode, perform System Restore. It should grant you access to the security tool. Likewise, you will be able to remove Magniber virus.

Guide which is presented above is supposed to help you remove Magniber from your computer. To recover your encrypted files, we recommend using a detailed guide prepared by 2-spyware.com security experts.

The official Magniber decryptor can help to restore file if you know the AES key. Otherwise, you will not be able to take advantage of this tool. However, you can try alternative recovery methods.

If your files are encrypted by Magniber, you can use several methods to restore them:

Note that backing your files is crucial especially at times of ransomware infiltration. If you did not create them, try this program. It might help you recover some files.

This utility creates the copies of original files based on shadow volume copies, which are automatically generated by the operating system. There is no information whether Magniber crypto-malware deletes them in advance. However, regarding Cerber's feature to delete them, the former virus might do so in the future as well.

As we already mentioned, the South Korean security team managed to create several decryptors for Magniber virus. You can find the full list above, or download them from the official website.

In case decryptors created by AhnLab do not work for you, you can try the older version, but it only helps to decrypt files encoded by the hardcoded version of the ransomware. It means you have to know the key and IV that are necessary in order to use the decryption software. You can download a decryptor here.

Finally, you should always think about the protection of crypto-ransomwares. In order to protect your computer from Magniber and other ransomwares, use a reputable anti-spyware, such as ReimageIntego, SpyHunter 5Combo Cleaner or Malwarebytes

You can quickly scan the QR code with your mobile device and have Magniber ransomware virus manual removal instructions right in your pocket.