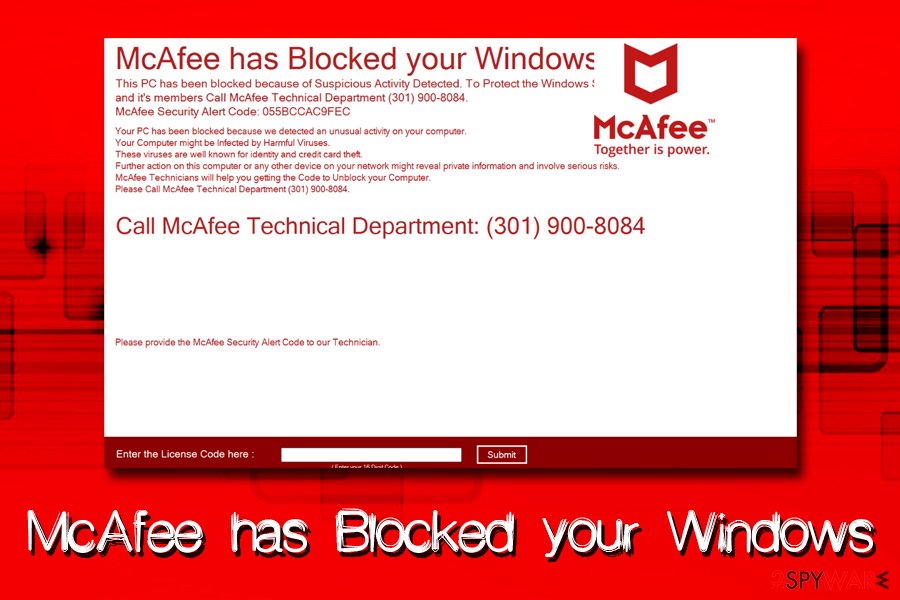 McAfee has Blocked your Windows is a fake alert that is displayed on users' screens after they get infected with malware. This technical support scam, unlike most other ones in the wild, is not generated inside Google Chrome or another browser but is an actual screenlocker which prevents victims from using their computer. The fake message claims that the device is suspected of alleged “Suspicious Activity” and that it is infected with viruses. Victims are urged to call (301)900-8084 to contact the fake McAfee technicians so that they could provide you with the code that would unlock the PC. As evident, McAfee has Blocked your Windows is merely a scam that uses the well-established name of reputable security vendor for its malicious deeds. However, there is no need to contact cybercriminals and rather use a code that was figured out by security experts already: H3J9-Z7K5-W5Y1-Q6L4.[1]

Screenlockers like McAfee has Blocked your Windows might resemble ransomware infection, apart from that it does not touch personal files, thus, is less devastating. Nevertheless, the virus is real, and the device is compromised as long as it is affected. To be able to use your computer again, users need to enter the code and then remove McAfee has Blocked your Windows virus from their machine using reputable application.

McAfee has Blocked your Windows fake message states the following:

McAfee has Blocked your Windows.

This PC has been blocked because of Suspicious Activity Detected. To Protect the Windows Services and its members all McAfee Technical Department (301) 900-8084.
McAfee Security Alert Code: 055BCCAC9FEC

Your PC has been blocked because we detected an unusual activity on your computer.
Your Computer might be Infected by Harmful Viruses.
These viruses are well known for identity and credit card theft.
Further action on this computer or any other device on your network might reveal private information and involve serious risks.
McAfee Technicians will help you getting the Code to Unblock your Computer.
Please Call McAfee Technical Department (301) 900-8084.

Bad actors use common scamming techniques: they alert users that there is a problem with their machine and threaten them with consequences (“identity and credit card theft”), creating a feeling of urgency. Additionally, crooks often use well-known names of industry giants, such as Google, Microsoft, as well as security vendors like McAfee (there is a very similar scam that looks exactly the same apart from a different color tone – “Webroot has Blocked your Windows”). Finally, users are unable to operate their computers due to the locked screen. For that reason, many might believe the fake alert and call the provided number.

Due to that, users might lose a significant amount of money for software they don't need or by paying for bogus services. Additionally, personal information can be sold to criminals, and remote access will grant crooks the ability to install malware directly onto the device. Therefore, do not believe McAfee has Blocked your Windows scam – your information is not in danger as long as you don't contact criminals by the provided number.

Before you can proceed with McAfee has Blocked your Windows removal, you need to enter the code H3J9-Z7K5-W5Y1-Q6L4 at the bottom of the screen. This will unblock your PC. To terminate malware, you should use one of the security applications that can recognize the threat, such as Reimage Reimage Cleaner Intego or SpyHunter 5Combo Cleaner.[2] 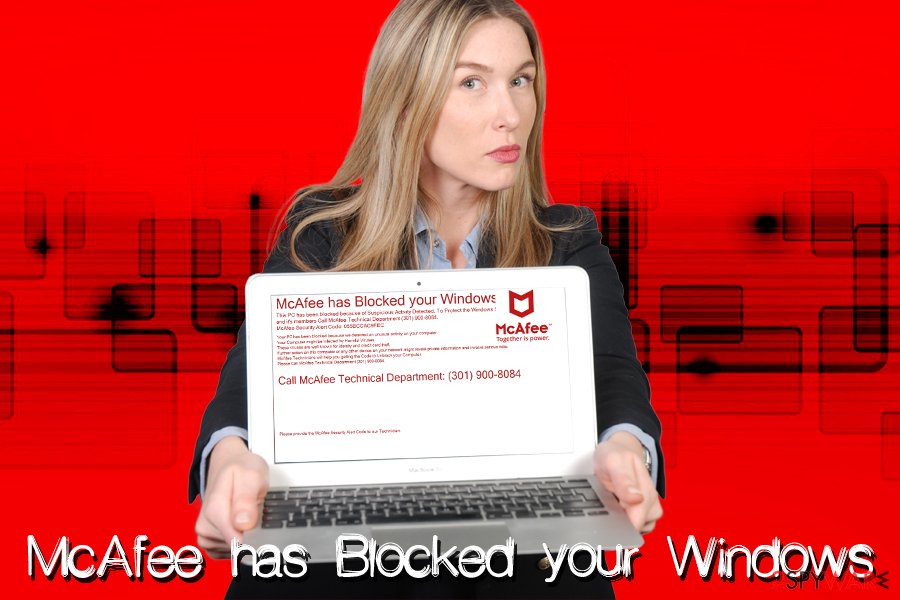 Be alert while browsing the internet – do not download questionable executables

Because the scam is not promoted by adware within the browser but is rather a real infection that compromises your device, it is most likely not distributed via software bundling. It is a deceptive technique used by freeware and shareware authors that allows them to hide the unwanted apps within software installers. Nevertheless, some bundles hosted on unsafe sites might include malware inside, not only potentially unwanted programs. For example, some of the Djvu ransomware variants were spread via adware bundles back in January 2019.[3]

It is highly likely that those who got infected with malware that locks the screen downloaded a fake installer from a third-party site, or got tricked by fake updates. Additionally, spam emails might be responsible for some of the infections. Therefore, make sure you scan every executable with security software or with online scanners like Virus Total. It is also vital to keep your operating system and installed applications up to date.

Unlock your computer and terminate McAfee has Blocked your Windows virus

If you are unable to use your computer because of the McAfee has Blocked your Windows virus infection, you need to enter H3J9-Z7K5-W5Y1-Q6L4 code at the bottom of the screen to regain the control of your device. However, as the virus will still be inside, so you need to eliminate it by installing and scanning your PC with anti-malware software such as Reimage Reimage Cleaner Intego or SpyHunter 5Combo Cleaner. It should remove McAfee has Blocked your Windows infection immediately.

You should not try manual McAfee has Blocked your Windows removal, as this threat is not a potentially unwanted program, but is straight out malware that heavily modifies your Windows system. Thus, please use our instructions below on how to access Safe Mode with Networking in order to each the safe environment and perform the scan from there.

To remove McAfee has Blocked your Windows, follow these steps:

To remove  McAfee has Blocked your Windows virus safely, you should enter Safe Mode with Networking as follows:

You can also use System Restore to kill the virus:

Finally, you should always think about the protection of crypto-ransomwares. In order to protect your computer from McAfee has Blocked your Windows and other ransomwares, use a reputable anti-spyware, such as Reimage Reimage Cleaner Intego, SpyHunter 5Combo Cleaner or Malwarebytes

Your opinion regarding McAfee has Blocked your Windows Cancel reply

You can quickly scan the QR code with your mobile device and have McAfee has Blocked your Windows manual removal instructions right in your pocket.

Poll
How did you remove McAfee has Blocked your Windows?
4.64 % used phone support
17.9 % downloaded software
29.58 % used free removal instructions
46.55 % combined software and removal instructions
0 % used email support
1.33 % got answer using Ask us service
Your vote has been submitted!
Vote »
I have problems with McAfee has Blocked your Windows removal
View results »