WanaDecryptor 2.0 virus function an alternative version of WannaCry or a subsequent version of Wana Decrypt0r[1]. Those, who have been away for the weekend, and are not aware of the recent ruckus caused by this malware, should bear in mind that this file-encrypting threat targets outdated Windows OS systems. Specifically, the ransomware exploits the EternalBlue or CVE-2017-0145 vulnerability. In its presence, the malware is able to enter the device via backdoor and thus encrypt files. It is disguised under Microsoft Security Center (2.0) messages. At the moment, there is no information about the used encryption strategy. A wide range of file formats is targeted. After the encryption, the corrupted data contains .wncry file extension. The weekend rampage resulted in 150 countries infected. On Friday, May 12th, the virus made its appearance after assaulting National Health Service in Britain, international shipping agency FedEx, Russian Interior Ministry, etc. Within hours, other well-known companies, in Spain, Japan, Germany, the US have reported the attacks. Little did the world new that the data stolen by Shadow Brokers from National Security would lead to this massive cyber attack after a few months. When the malware got loose on Friday, cyber security specialists have issued urgent updates for the virtual community. Luckily, an anonymous user under the Twitter name MalwareTech[2] has managed to find a “kill switch” in the programming code and terminate the malware for a while. Though he bought time for IT experts to come up with a strategy, the crooks have quickly found a way how to patch the weakness. On Monday, 15 May, new versions have sprung to life. Thus, despite how menacing this virus is, users are encouraged not to give in to terror and concentrate on WanaDecryptor 2.0 removal. One of the possible options to do that is to run Reimage Reimage Cleaner Intego or Malwarebytes. 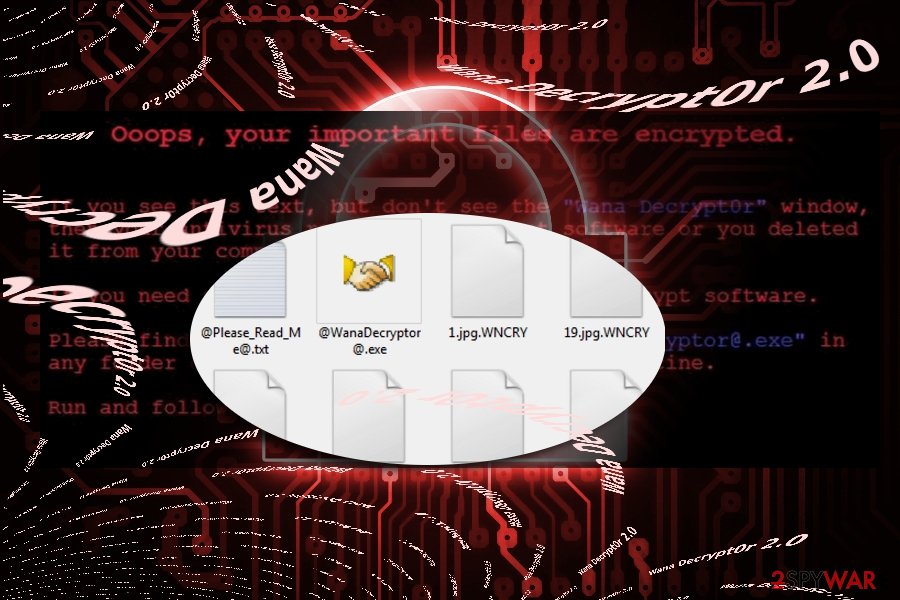 There are already dozens of samples of the malware. You can notice Korean, Chinese, German, Russian, Canadian, Argentinian variations of the malware[3]. The very ransom note does not differ from other virus examples. The ransom note of WanaDecryptor 2.0 malware, which is named “Ooops, your files have been encrypted!” reveals a clock with elapsing time. In order to retrieve files, victims are instructed to transmit $300 in bitcoins. However, there are very few chances to recover files even after remitting the payment. The perpetrators do not provide any service which decrypts one or two files for free. Instead of nurturing hopes of retrieving files, it would be better to remove Wana Decrypt0r 2.0 right away.

While the virtual community struggles to tame the virus, IT experts investigate the origin and possible source of Wana Decrypt0r malware. The malware presents an eloquent message written in fluent English. What is more, its scale suggests that the developers employ an enormous or even several botnets to spread terror with the malware[4]. However, recent findings reveal interesting information, that the original version might have originated in Malaysia. The initial version of the malware has been discovered by a company director in Malaysia after he noticed the infection in the laptop[5].

Distribution strategies of the malware

Users should take immediate action to update their operating systems as time is a fatal factor preventing Wana Decrypt0r 2.0 hijack. Botnets might be responsible for the cyber campaign of the virus. Furthermore, the malware would not have been such destructive if not for its worm-like features. Once settled on the system, it scans the network or server. Thus, this feature explains how Wana Decrypt0r 2.0 ransomware was able to spread so rapidly within such short period. Thus, users should make a rush and install a recent Windows update and update security applications. Since the malware affected Fedex company, users should be cautious of possible fake spam emails supposedly sent from this company. Though current distribution technique is much useful, cyber villains may divert to this distribution method as well. 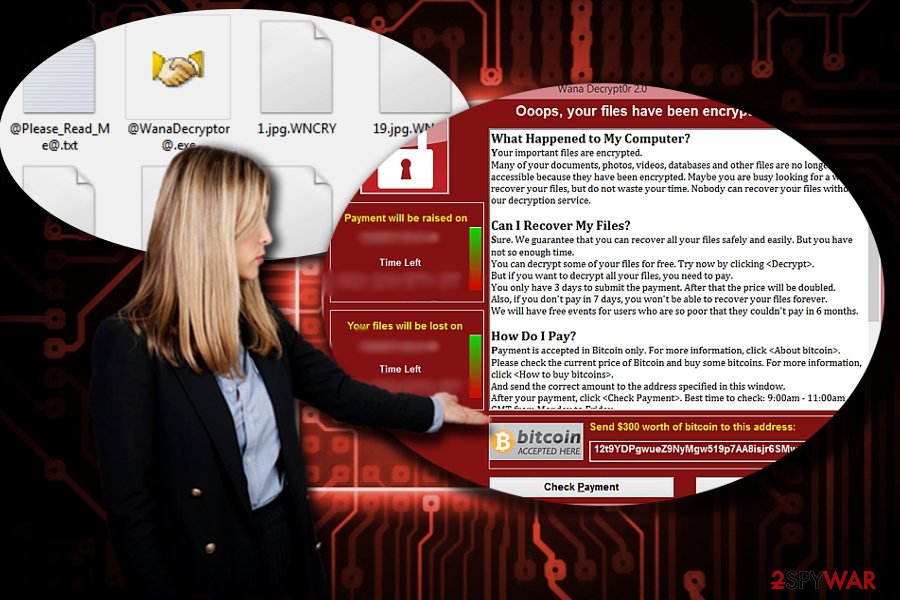 The original version of Wana Decrypt0r 2.0 was spotted in Malaysia

If this misfortune has seized the computer and encrypted files, the first thing you should do is run anti-malware program. It will help you remove Wana Decrypt0r 2.0 virus. In case, the threat completely deprived you of the right to control the device, the following instructions might come in handy. Note that malware elimination application does not decrypt files. For that purpose, make use of the below guidelines entitled as ”Bonus: Recover your data.” These methods will be only effective when you complete Wana Decrypt0r 2.0 removal.

If the first method failed to regain control of the system, you may opt for this method. Note after you restore the system to the last autosaved system image, some files or apps, downloaded during the last system restore point and the present, might be lost.

Guide which is presented above is supposed to help you remove Wana Decrypt0r 2.0 from your computer. To recover your encrypted files, we recommend using a detailed guide prepared by 2-spyware.com security experts.

If your files are encrypted by Wana Decrypt0r 2.0, you can use several methods to restore them:

This universal tool is designed for recovering files after a system crash. On the other hand, it might prove to be effective in decrypting files affected by Wana Decrypt0r 2.0 as well.

The Possibilities of Shadow Explorer

The main benefit of this tool is data recovery based on shadow volume copies. This method is effective only if the malware does not delete them automatically in advance.

Finally, you should always think about the protection of crypto-ransomwares. In order to protect your computer from Wana Decrypt0r 2.0 and other ransomwares, use a reputable anti-spyware, such as Reimage Reimage Cleaner Intego, SpyHunter 5Combo Cleaner or Malwarebytes

You can quickly scan the QR code with your mobile device and have Wana Decrypt0r 2.0 ransomware virus manual removal instructions right in your pocket.