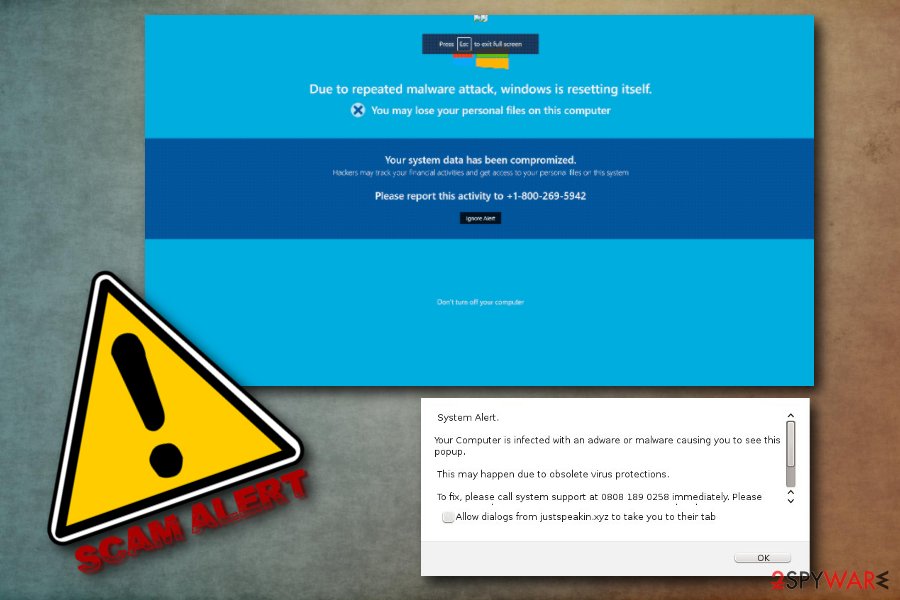 Windows Is Resetting Itself scam is one of tech support scams[1] designed by cyber crooks to make users believe that their PCs are infected with multiple viruses. Typically, victims get informed that Windows will be rebooted due to malware attack. Additionally, Windows Is Resetting Itself scam asks the victim to call via the given number to report this activity to Microsoft experts. You should never do that because it is the easiest way to be tricked into installing malware, signing up for useless service and revealing your personal information.

To mislead its victims into believing that they are dealing with real Microsoft support, Windows Is Resetting Itself virus is using Windows logo and colors which greatly resemble real Windows messages. However, the pop-up is fake and has nothing to do with Windows Corporation. In reality, it is closely related to adware-type program which can easily hijack needed web browsers.

Adware is classified as a potentially unwanted program because it typically infiltrates victims’ machines without permission and makes unwanted changes to their systems. It allows the suspicious program to execute several undesirable tasks, like deliver invasive ads in the form of Windows Is Resetting Itself and similar alerts, redirect victims to suspicious sites, slow down their machines and record non-personally identifiable information.

Windows Is Resetting Itself scam is identical to many others scams, including the following:

All these frauds are remarkably similar and have the same aim – to scare users into thinking that their machine is infected and that the only way to avoid computer damage and stolen personal information is to dial the advised number and contact “Microsoft” tech support. In this case, the number which is involved to  scam is +1-800-269-5942. However, note that it can vary.

A real Windows message would never urge you to contact them in such manner. Hence, as soon as you see the alert which is displayed below, close down your Google Chrome, Internet Explorer, Mozilla Firefox, Safari or other browser and proceed with Windows Is Resetting Itself scam removal.

The following fraudulent message is displayed:
Due to reported malware attack, windows is resetting itself.
You may lose your personal files o this computer.
Your system data has been comporomized. Hackers may track your financial activities and get access to your personal files on this system.
Please report this activity to +1-800-269-5942

Scare tactics are a widely used psychological manipulation[2] by cybercriminals. Inexperienced users who never encountered fraudulent Windows Is Resetting Itself pop-ups before might think that it is legitimate and that their personal data and computer are in danger. In a state of shock, they might call the provided number.

Typically, the fake technician then proceeds to explain, how severely the PC is damaged and that it needs an immediate fix. The only way to do that is by letting him guide the user through “repairing” process, which is then charged. Alternatively, he might ask for remote access to victim’s machine.

If authorized, the thief might install malware or steal sensitive data, such as bank account information, social security number, name, address, email address, etc. This data can be used for malicious purposes, such as identity theft. It is a severe security threat and should never be taken lightly. Therefore, do not fall for crooks’ trap and never contact them.

Security experts from usunwirusa.pl[3] warn, that even if adware is not dangerous on its own, it can lead to phishing websites and trick users to extort their money or personal data. Therefore, remove Windows Is Resetting Itself fake alert immediately by using a robust security tool, such as Reimage Reimage Cleaner Intego. 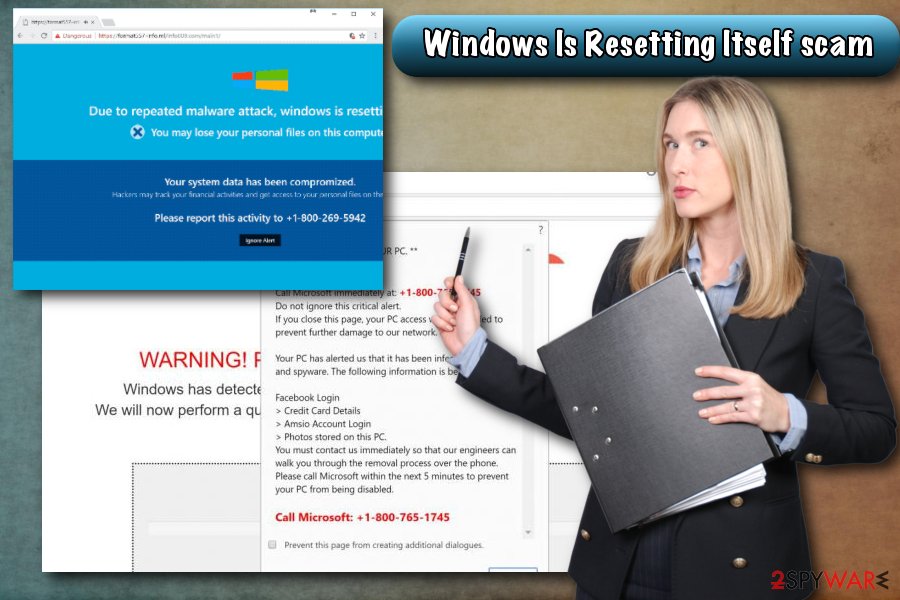 The way adware is distributed

Adware is a relatively harmless piece of software which is created to deliver advertisements. Unquestionably, users would not install such programs themselves, as nobody likes to deal with a compromised browser that displays numerous ads every browsing session.

Windows Is Resetting Itself scam removal is not a complicated task as even not so computer-savvy individuals can perform it. All they have to do is download reputable security software, bring it up to date and perform a complete system scan. It is quick and easy and only takes few minutes.

Nevertheless, users who want to remove Windows Is Resetting Itself virus without downloading additional software can follow our guide below. This method is not as convenient as it requires much more time to complete and also might be too complicated for inexperienced users.

To remove Windows Is Resetting Itself, follow these steps:

Uninstall Windows Is Resetting Itself from Windows systems

To uninstall suspicious programs from Windows OS, follow these steps:

Remove Windows Is Resetting Itself from Mac OS X system

Erase Windows Is Resetting Itself from Internet Explorer (IE)

Get rid of Windows Is Resetting Itself from Microsoft Edge

Once these steps are finished, Windows Is Resetting Itself should be removed from your Microsoft Edge browser.

Delete Windows Is Resetting Itself from Mozilla Firefox (FF)

Eliminate Windows Is Resetting Itself from Google Chrome

Reset your Google Chrome browser after full Windows Is Resetting Itself scam elimination:

Uninstall Windows Is Resetting Itself from Safari

Your opinion regarding Windows Is Resetting Itself Cancel reply

You can quickly scan the QR code with your mobile device and have Windows Is Resetting Itself manual removal instructions right in your pocket.

Poll
How did you remove Windows Is Resetting Itself?
2.18 % used phone support
7.14 % downloaded software
14.16 % used free removal instructions
75.18 % combined software and removal instructions
0 % used email support
1.33 % got answer using Ask us service
Your vote has been submitted!
Vote »
I have problems with Windows Is Resetting Itself removal
View results »