IPA virus, or International Police Association malware, term defines one ransomware, though it is also applicable for a group of Police viruses[1]. These threats are also affiliated with Ukash cyber infections[2]. Once such infection infiltrates the device, it generates a ransom message which alarms users with “Your computer has been blocked” alerts. By disguising under the authority of the police, the perpetrators aim to wheedle out delicate amounts of money from the victims. The amount of demanded ransom varies from several hundred of dollars up to €100 000. The number and variety of threats reveal that an organized gang of felons work on IPA malware campaign. The malware has its counterparts which target Australian, German, French, and Dutch users. Furthermore, the hike of such infections was recorded in 2012 and 2013. Though now “Ukash” or IPA virus is rarely uttered, nevertheless, the malware is still present in the cyber space. If this menace has seized the device, do not comply with the demands but rather remove IPA virus at once. One of the ways to do it is to employ the services of ReimageIntego or Malwarebytes. 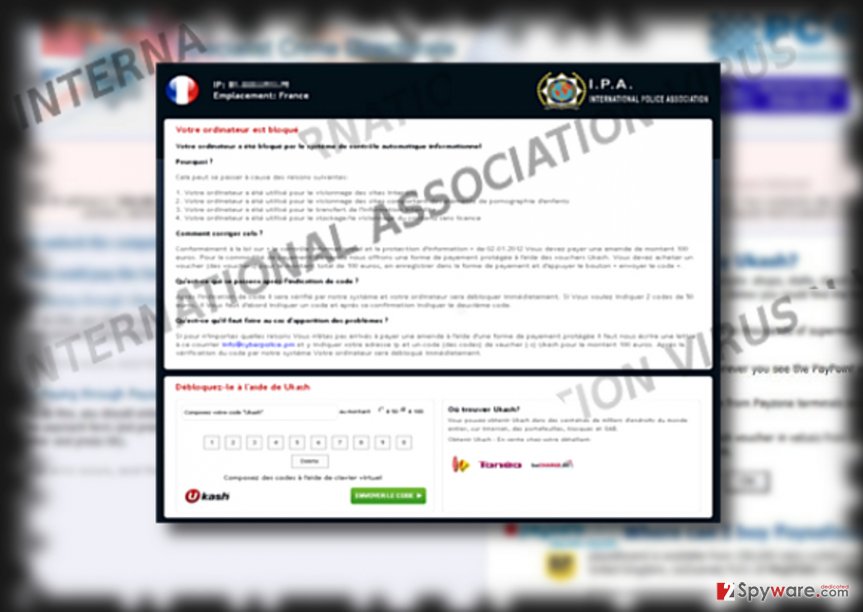 The developers of this malware group victims generate intimidating alerts about violated laws. Depending on the geographical location of a victim, he or she might encounter FBI scam virus or Metropolitian Police alert informing about the computer locked device.

In order to frighten the targeted users even more, they accuse netizens of violating the laws for illegal activities such as child pornography, copyright infringement, and similar content. In order for victims to evade imprisonment sentence, they should transfer several hundred dollars to a specific email, for example, info@cyberpolice.pm. Note that the domains of email addresses differ from the ones provided in the official websites of such governmental institutions. Indeed, more credulous users may fall for the scam. Instead of dashing to the payment site, consider IPA removal.

FBI virus. The first signs of this malware have been spotted already in 2012[3]. During the years, the malware has evolved into a significant threat which targets both, Windows and Android OS systems. Likewise, this screenlocker malware is also known as Android ransomware. After the infiltration, the virus initiates “FBI Federal Bureau Investigation”, “CIA Special Agent” and similar messages. Copyright rights violation, child pornography, and similar topics prevail as alert material in this type of scams. They propose several payment options for victims to escape court sentence. Usually, racketeers demand approximately 100 USD as a ransom. In the case of real alerts, the institution would send you a letter via post office. If you delay to respond, they would contact you via phone or other means. Needless to say, that in the case of real privacy violation, they do not demand you paying money. 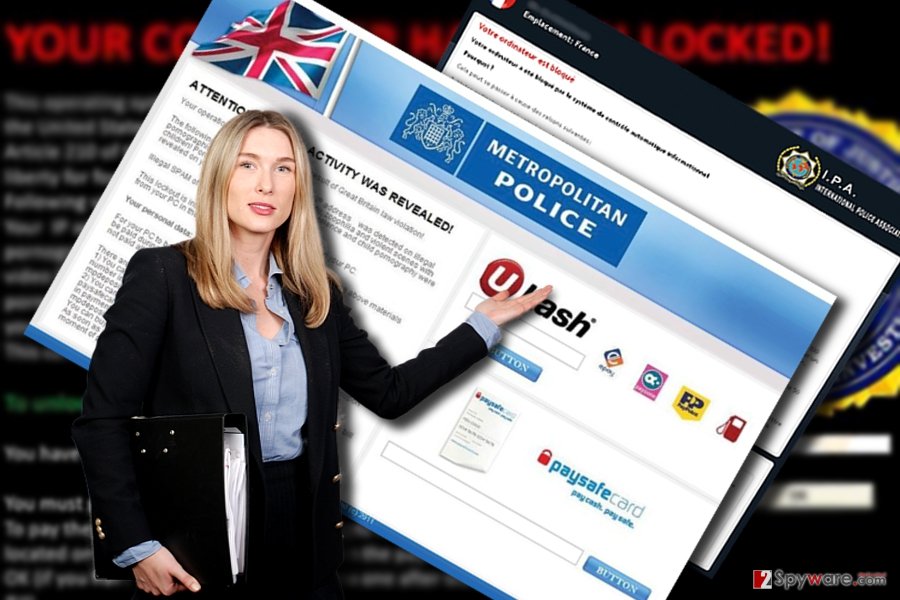 Metropolitan British Police virus. This variation (Strathclyde Police scam virus) targets residents of the Great Britain[4]. Charges for viewing and storing material related to child pornography, rape, and zoophilia exert pressure on the victims. Interestingly, that this variation also threatens users with possible 5 to 11 years imprisonment sentences. The felons have polished the style of the text to deceive users into thinking that the message is genuine. They even include references to Criminal Code to create even a more realistic impression. Lastly, they demand payments in Ukash, UK-based electronic currency codes. The malware is likely to be distributed via infected websites, and web pages.

IPA ransomware. Once the ransomware settles on the device, it would encrypt files and then present a counterfeited message of International Police Association. Similarly to other samples of the infection, the message states that the user has violated Section 106 of the Copyright Act. Furthermore, the alert urges victims to acquire Ukash vouchers equivalent to the amount of 100 USD. For more information, the victimized users may contact stoppirates@yahoo.com. In this case, the email domain suggests that the email is counterfeited. Fortunately, this version is decryptable. What is more, It experts noticed that a new version of IPA malware has been released in the cyber space. The new edition would include executable files placed into .zip folders. The ransomware also targets all local drivers. It has been detected as  Trojan.GenericKD.4768893, Win32:Malware-gen,  MSIL/Generic.AP.742E9E!tr[5]. Several bugs in the programming code suggest that the malware can be decrypted.

The key transmission technique of IPA ransomware lies in infecting devices via trojans. Note that Trojan:W32/Reveton facilitates IPA hijack and distribution of Ukash virus. In order to terminate the latter, you need to launch the device in Safe mode and locate the following entry: C:\Users\Username\AppData\Roaming\Microsoft\Windows\Start Menu\Program\Startup\ctfmon.lnk. Eliminate it and the scan the device again. It is one of the variations preferred by Ukash virus. They may be planted in poorly protected websites, as well file-sharing web pages or gaming sites. IPA ransomware may be also distributed via outdated or questionable browser plug-ins and software. Thus, upon installing new programs, you have to pay extra vigilance to deselect all irrelevant optional tools. Regarding the fact, that the new version of ransomware as been released, users may be targeted with similar fake messages from the FBI or similar institutions. Avoid opening any attachments before verifying the sender.

Taking into the account the shape-shifting capabilities of this malware, it is not recommended to remove International Police Association virus manually. For that purpose, we suggest scanning the device wit both, your anti-virus and malware removal utility. Since this virus also behaves as a screenlocker, you may encounter certain difficulties running the security application. In that case, restart the PC into Safe Mode and launch the program. After that, you will be able to complete IPA removal. In the end of the article, you will also find the guidelines how to decrypt files. In the future, make sure you regularly back up your files to reduce the scale of damage if ransomware ever occupies the device again.

If Safe Mode failed to unblock the screen, you may opt for System Restore. Follow these steps:

Guide which is presented above is supposed to help you remove International Police Association from your computer. To recover your encrypted files, we recommend using a detailed guide prepared by 2-spyware.com security experts.

If your files are encrypted by International Police Association, you can use several methods to restore them:

Recover the files locked by the ransomware

If your computer is infected not with an ordinary version of IPA Screen Locker, but with the file-encrypting variations, this tool may be of assistance retrieving the affected files. It may also help you restore deleted emails as well.

The benefit of Shadow Explorer

Since this virus family group tends to lock screens, there is a high probability that the program may restore the encrypted documents. It uses shadow volume copies as the material to recover lost data.

There is still little information about the latest decrypter, but you may use the older one to decrypt files.

Finally, you should always think about the protection of crypto-ransomwares. In order to protect your computer from International Police Association and other ransomwares, use a reputable anti-spyware, such as ReimageIntego, SpyHunter 5Combo Cleaner or Malwarebytes

You can quickly scan the QR code with your mobile device and have International Police Association virus manual removal instructions right in your pocket.