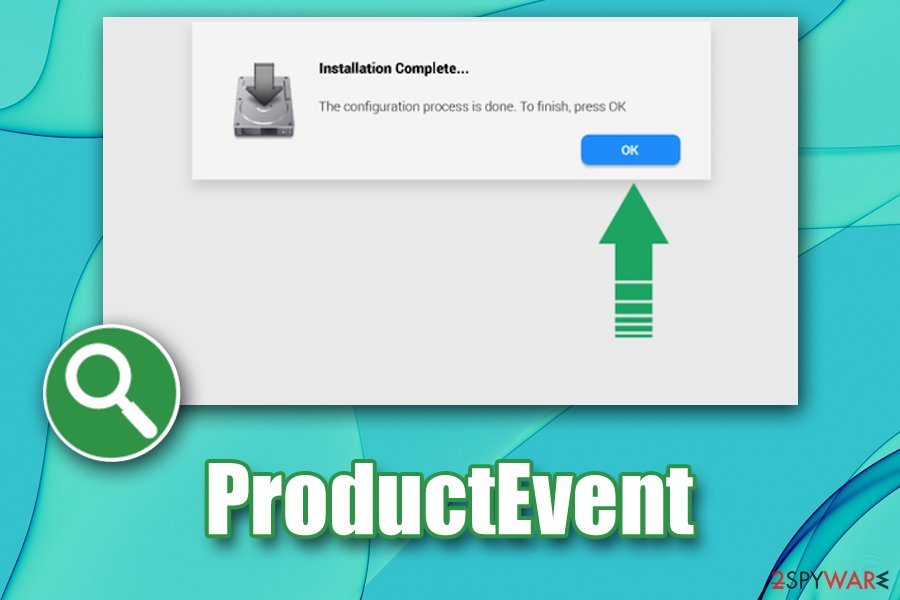 ProductEvent is software that users might discover on their Mac computers seemingly out of nowhere, as it is often bundled with freeware or is installed via fake updates. It specializes in displaying various in-text links, pop-ups, auto-plays, pop-unders, banners, and other advertisements on Safari, Google Chrome, and Mozilla Firefox browsers. Nevertheless, the developers promote the app as a useful tool that can assist users with their web browsing activities. ProductEvent is nothing more but an adware program and should not be kept on any Mac system, as it might result in unsatisfactory web browsing experience, money loss, installation of other potentially unwanted programs – or even malware.

Because ProductEvent is a potentially unwanted application that is ad-supported, it is highly likely to gather information about users' web browsing habits. In some cases, the data might be personally-identifiable and, if leaked to inappropriate parties, might be used for malicious purposes, such as fraud.[1]

ProductEvent ads appearance often comes as a surprise to users, as it uses deception to get installed on Mac systems. In most of the cases, users let it in during the installation of freeware/shareware from third-parties, as they are required to enter their passwords during the process. Alternatively, the ProductEvent virus might be installed after users get tricked by fake Flash Player update prompts – they might be encountered on a multitude of malicious sites on the internet.

The developers of ProductEvent adware seek to gain monetary benefit from clicks that users make and predetermined websites that they visit. Without a doubt, these practices do not bring any benefits to users, as they have to deal with coupons, deals, offers, and other promotional content regularly – it might even hinder the underlying content of the site. However, intrusive ads are not the only reason to remove ProductEvent.

Just as many other adware programs, ProductEvent might collect a variety of information about users, for example:

Cookies, web beacons,[2] and other tracking technologies are used to collect the data. Because ProductEvent is published by an unknown developer, there are no legal documents bounding the app to protect this information in any way. Thus, it might be sold for marketing purposes or end up in the hands of cybercriminals. 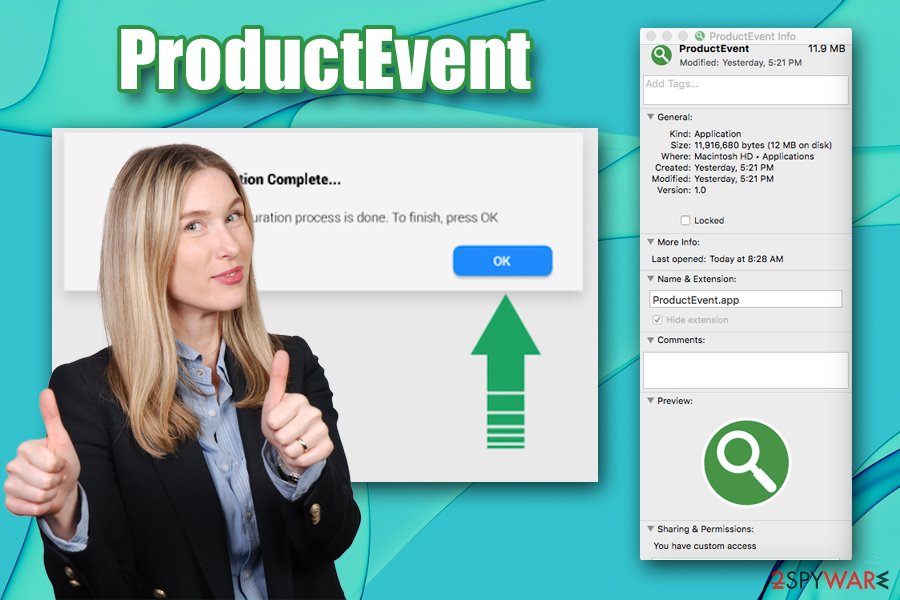 ProductEvent is adware that belongs to series of similar deceptive apps purely designed for ad revenue, as they bring no benefits to the end user

ProductEvent is one of the apps that belong to series of adware developed for Mac operating systems that use the same icon and operates practically identically – it is highly likely that the distributor of these apps is the same (other examples include IdeaShared, SystemJump, LookupShare, Coordinator Plus, etc.). It is a very common practice when it comes to PUPs – the same applications are re-skinned and distributed as new ones. This is done in order to avoid a bad reputation, as well as the detection of anti-malware software on the host computer.

ProductEvent removal usually should not be difficult, although some users said that they struggled with the process. If you want to get rid of the unwanted app properly, scan your machine with anti-malware and then reset all the installed browsers, as explained below. For best results, we advise using Reimage Reimage Cleaner Intego as well.

There are several applications that can be downloaded from the third-party official websites and be entirely safe (for example, anti-malware apps). Due to the functionality of anti-virus software, these applications cannot be placed on the official Apple stores, as they require special permissions to ensure system security. However, this is merely one of a few exceptions, and most of the third-party sites should not be used to download new applications.

App Store currently offers 1,8 million applications for users to download.[3] While recent events showed that some malicious apps might be inserted into official sources as well, chances of that happening are extremely low. Thus, considering such a large number of applications available, there is no need to use third-party sites in the first place. In most of the cases, users infect their Macs when installing software from websites that host pirated content (torrents, warez) or various other app hosting sites.

To avoid that, stick to official sources when looking for new apps. If you absolutely have to download something from a third-party, make sure you pay close attention to the installation process to avoid the installation of optional components. For example, freeware developers often use fine print texts, misleading offers, misplaced buttons, pre-ticked boxes, and similar deceptive methods. Thus, when prompted, opt for Advanced/Custom settings and get rid of all the unwanted apps. 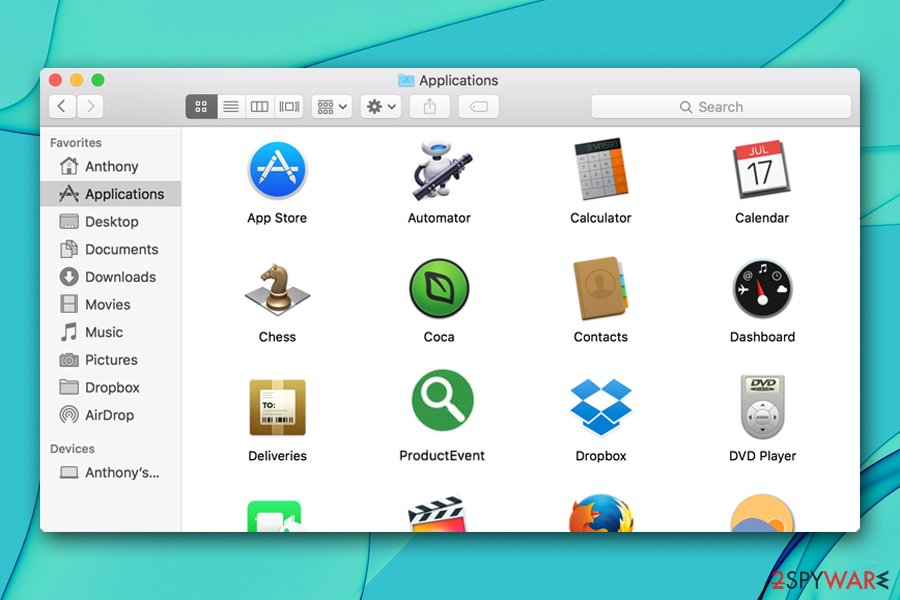 Users should find the app installed on their computers, as well as the ProductEvent extension on Safari, Google Chrome, or Mozilla Firefox

Get rid of ProductEvent adware from your macOS

Manual ProductEvent removal might be a little difficult sometimes, as adware commonly uses various techniques to increase the persistence on the computer. For example, multiple components are dropped into different sections on the operating system, and finding them might be problematic, especially for a novice user. Therefore, it is best to trust reputable anti-malware that could locate these entries automatically and get rid of them in just a few moments.

Nevertheless, if you decide to remove ProductEvent by yourself, you should remember that moving the app to trash is hardly going to be enough. Before doing so, you should check your Activity Monitor for suspicious processes and shut them down. After that, examine the following locations on your Mac, and delete suspicious entries:

After termination of ProductEvent adware, make sure you reset each of the installed browsers, as explained below.

Get rid of ProductEvent from Mac OS X system

To get rid of ProductEvent virus from your macOS, please perform the following steps:

Adware affects settings of the installed web browsers. Make sure you rest Google Chrome as soon as PUP is terminated:

Your opinion regarding ProductEvent Cancel reply

You can quickly scan the QR code with your mobile device and have ProductEvent manual removal instructions right in your pocket.