AgileHelp is a potentially unwanted program that will spam your Safari, Google Chrome or another browser with intrusive ads and record your web browsing activities 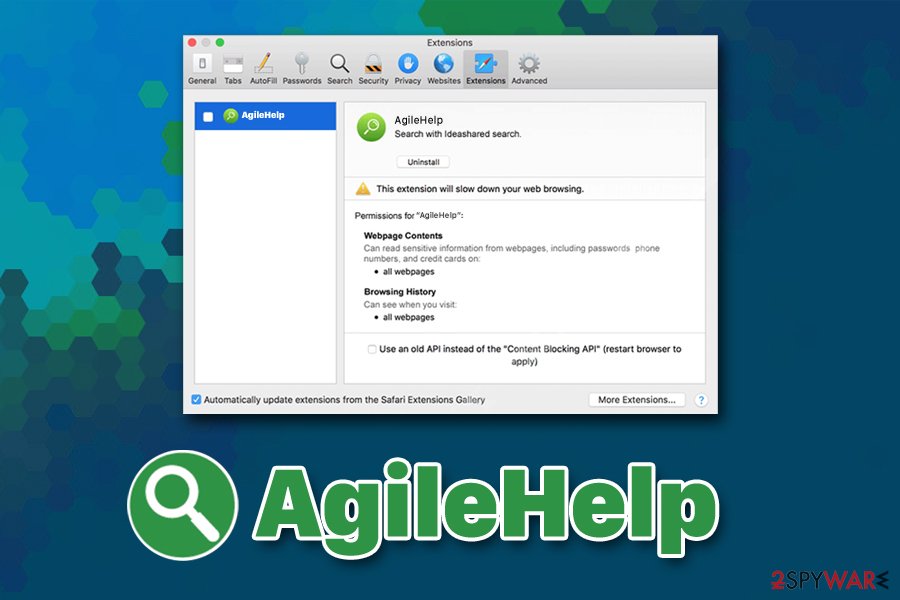 AgileHelp is an adware app that has been bothering Mac users lately and is a part of a large potentially unwanted program[1] family developed by the same authors. In most of the cases, the unwanted app manages to access the machine during the installation of freeware acquired from third party sites, or when users get tricked by a fake Flash update, as well as an attractive online ad. In rare cases, AgileHelp adware might be installed intentionally, as it promises to enhance web browsing experience to users.

As soon as AgileHelp virus accesses the macOS after acquiring permission from users to get installed, it changes various settings and appends an extension to Google Chrome, Mozilla Firefox, or Safari web browsers. Additionally, it acquires persistence on the host machine by implementing a new profile without permission, making AgileHelp removal a difficult task.

In the meantime, users' browsers are filled with pop-ups, banners, in-text links, flashing windows, and similar unwanted ads. Besides, during web browsing, they might be redirected to less than secure websites that attempt to distributed malware by employing phishing techniques.

Because AgileHelp is often bundled with other applications, there is a high chance that it is not the only PUP on your machine. Besides, due to various redirects and sponsored links, you might end up on a scam site, which would ask you to disclose personal information, consequently leading to possible identity fraud.

In other cases, AgileHelp might link you to a fraudulent website that claims virus infections on Mac (hoaxes like Your system is infected with 3 viruses, Immediate action required, Apple Warning Alert, and similar, are common) and ask you to download an alleged anti-malware or fake system optimizer to stop the infection along with its consequences. In reality, the proposed tools are PUPs, and their only goal is to make you purchase the full version of these apps by showing bogus scan results.

As mentioned above, AgileHelp belongs to a family of Mac viruses that has been spreading around like a plague – these malicious apps can be recognized by the distinct icon that is placed on the Doc – a magnifying glass embedded into a round, green circle. Users complained that similar apps, such as Prodigy Search, ProductEvent, or ProntoApp, were appearing seemingly out of nowhere and were difficult to uninstall. 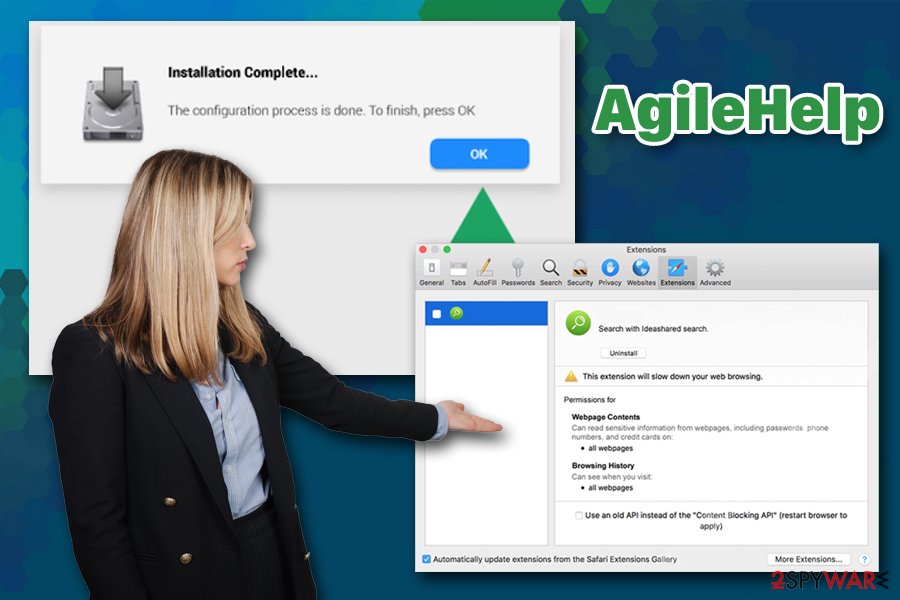 AgileHelp is essentially the same application which name is constantly being changed by its developers to avoid detection by AV engines.[2] Nevertheless, sophisticated anti-malware does not base the detection of malicious software on its name but rather on its behavior and changes that it makes to the system. Therefore, you cannot remove AgileHelp manually, you should try using powerful, up-to-date security software. Alternatively, refer to the instructions below.

In the meantime, AgileHelp virus might also allow itself to read sensitive information from all websites that you visit, thanks to permissions acquired via the web browser extension. In such a way, unknown parties might harvest data like credit card information, passwords, emails, etc.

All in all, you should get rid of AgileHelp ads by uninstalling the app and the extension from the system. However, due to its persistence, you might have to reset the installed browsers to get rid of the unwanted extensions. Additionally, to free up the clutter from Mac and increase its performance, we recommend using Reimage Reimage Cleaner Intego as a complementary application to the powerful anti-virus.

PUAs trick their way into your macOS

While adware and other potentially unwanted applications are not as dangerous as malware, it is still a computer and security threat that should be avoided. Nevertheless, these two categories do have some similarities.

While adware is distributed in software bundle packages or via fake Flash updates, users still are always prompted to enter their Mac credentials in order to let the app in. Consequently, they are installing the unwanted app themselves, even though they get tricked by unfair distribution practices – this is one of the fundamental differences between adware and malware (of course, the post-infection processes differ as well – some more, some less).

Therefore, it is important to know about the distribution tactics of unwanted programs, as many people say that they found the app seemingly out of nowhere (it is simply not true). To avoid the unexpected infiltration, follow these simple security tips:[3] 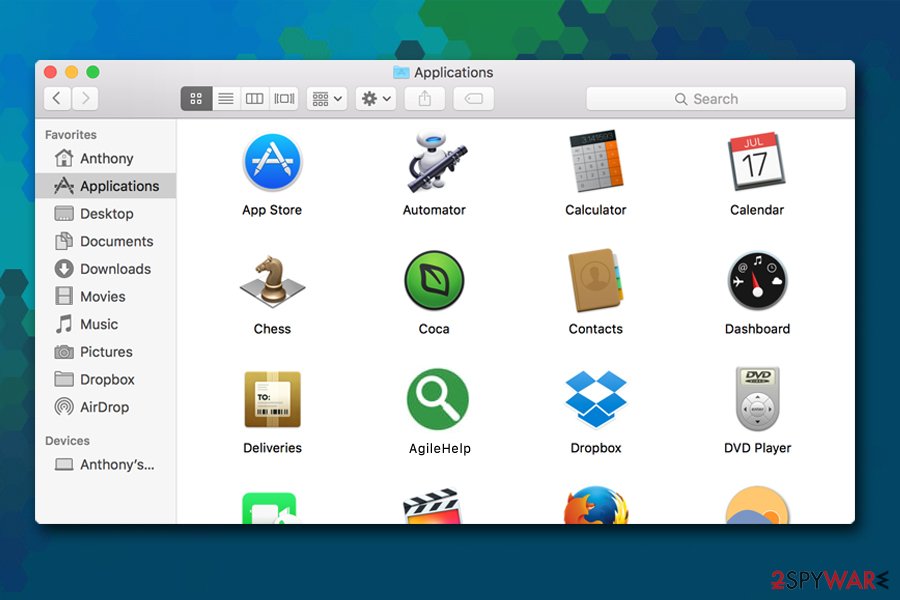 Moving AgileHelp to trash is usually not enough to get rid of it, as it leaves multiple traces around the system

Get rid of AgileHelp adware to avoid personal information compromise

Because AgileHelp virus creates several entries on macOS systems, getting rid of all of them might be quite complicated for less experienced computer users. In most of the cases, dragging the app into the Trash can is enough, but not with an aggressive form of adware, as it can easily reinstall itself due to the established profile. Thus, to remove AgileHelp profile, you should go to System Preferences > Accounts> Login Items. After that, you should also check the following folders:

However, this would not conclude manual AgileHelp removal, as there is a high chance that an extension is also attached to the web browsers you have installed on your system. Reset all the browsers by following the instructions below. If the activity continues, we highly recommend scanning the device with anti-malware software, which could get of all the adware components automatically.

To remove AgileHelp from your Mac, drag the app to Trash:

The unwanted app might leave the extension installed on your Mozilla Firefox browser. Reset it as follows if you can't get rid of it manually:

Get rid of AgileHelp from Google Chrome

Your opinion regarding AgileHelp Cancel reply

You can quickly scan the QR code with your mobile device and have AgileHelp manual removal instructions right in your pocket.