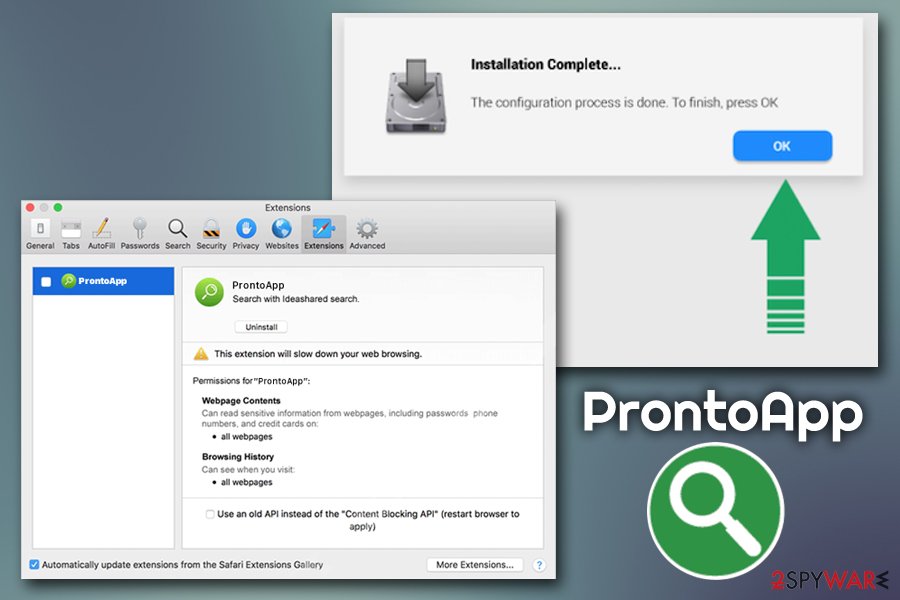 ProntoApp is an adware app published by an unknown developer and is designed for all versions of Mac operating systems. The potentially unwanted program[1] might be installed along with freeware/shareware applications from third-party sites, or when users get tricked by an attractive online app, as well as a fake Flash update. Due to these reasons, users are rarely aware that ProntoApp got installed on their systems – at least, not straight away.

As soon as ProntoApp establishes on the macOS, it immediately performs several changes to Google Chrome, Safari or another browser: users will notice that their homepage has been changed to Bing, Smart Search, or similar, and they are forced to browse via a hijacked search engine (in most of the cases, ProntoApp extension is installed). Due to this, the search results victims see are not organic, although this allows the developers to monetize on clicks made. Besides, the adware will also insert scams, fake updates, pop-ups, deals, banners, offers, coupons, and other intrusive and possibly malicious content when browsing the internet.

However, typical hijacking activities are not the main problem with ProntoApp, as it also engages in numerous actions that are more related to malware rather than adware – it can read sensitive information users insert on all sites (such as credit card details) and is also equipped with persistence mechanisms that usually prevent an easy ProntoApp removal from the infected machines.

Besides modifying web browser settings, ProntoApp adware also attaches an extension to it. This helps the app to gather various information about users for targeted advertisement[2] campaigns. The collected data might include:

ProntoApp application is not the only one that has been infecting Mac users in recent months. It is highly likely that it is a work of the same developer as ProductEvent, CoordinatorPlus, IdeaShared, and many others. All of the programs use the same magnifying glass icon with a green background and are not signed by any developer. In other words, ProntoApp is a re-skinned version of the same application, just named differently – this is a common trait of shady programs that are spread around the web by using deceptive means in order to gain quick revenue from infected users.

In fact, ProntoApp is so intrusive and persistent, that many users attributed it “ProntoApp virus” or “ProntoApp malware” term. While it is not entirely true (this app seems to be an aggressive type of adware), users have every right to be concerned, as unwanted changes to the installed web browsers, redirects, pop-up ads, slowdown of macOS, and other symptoms are something that nobody should deal with. 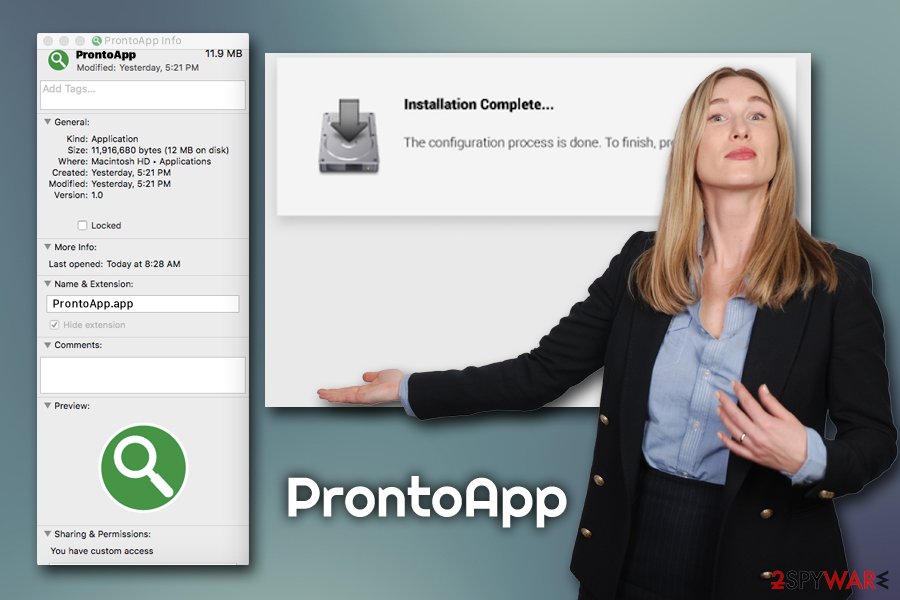 Besides showing ads to infected users, ProntoApp is also dangerous due to its redirection tendencies. Adware is known to sometimes direct users to scam or fake update sites, where they are prompted to download other potentially unwanted programs or call fake technicians for an alleged fix – a few examples of popular scams include “Your system is infected with 3 viruses,” “Immediate action required,” and many others.

You should remove ProntoApp with the help of our instructions below. If you encounter difficulties during the process, you should also scan your Mac with anti-virus software. Additionally, you should also reset your browsers and employ Reimage Reimage Cleaner Intego if you want to make sure that your computer is in its best shape after the infection.

Be careful when installing applications from third-party sites

There is a reason why many security experts[3] advise users staying away from third-party sites when it comes to new software installs. Apple uses sophisticated scanners and other checks before allowing an application into the App Store (although even the tech giant might sometimes fail to detect malicious apps, as 17 of them were recently removed after security firm detected shady practices of adware). Unfortunately, third-parties do not have the resources and the need to perform such broad checks before apps are placed on the site.

When you try to install an app from a third-party site, GateKeeper will detect the unofficial origin and ask your credentials to allow the installation – this stops many unwanted apps from entering without permission. The problem is that users are tricked into agreeing to install those applications and enter the credentials nonetheless.

When installing apps from third-parties, make sure you take precautionary measures. Most importantly, you should never rush the process, opt for Advanced/Custom settings, check each of the installation steps carefully, and decline all promotional offers on the way. 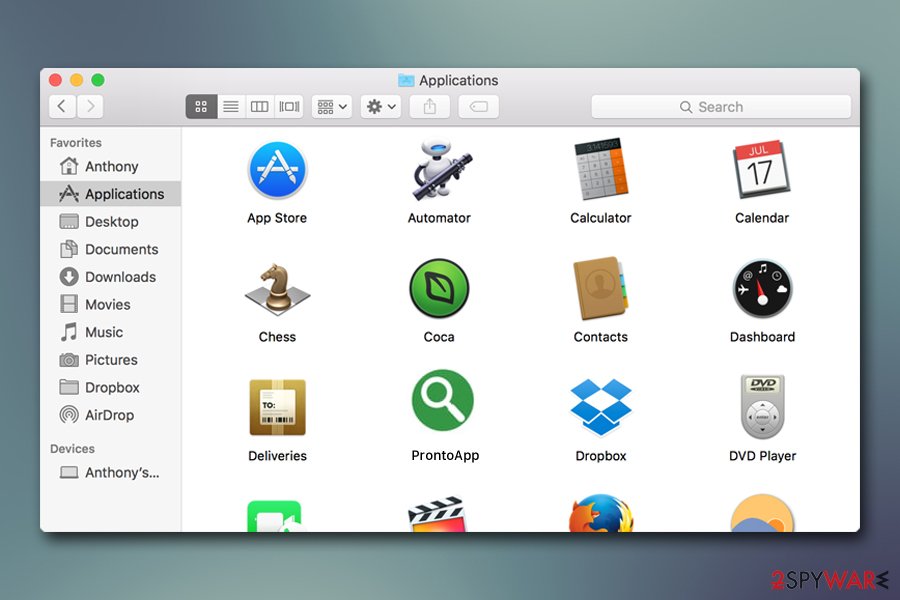 ProntoApp might install itself as a standalone app, although there is a high chance that a browser extension is added as well

When it comes to ProntoApp adware, it is one of those more aggressive and deceptive types that nobody knows the origins of. If anything, it reminds more of malware that seeks to monetize on users' ruined web browsing experiences – it also puts their safety at risk. It is also not surprising, considering the nature of the app, that many might be struggling when trying to perform ProntoApp removal.

We suggest you first try to remove ProntoApp manually by finding all its components on macOS and deleting them. Here's what you should look for:

The problem is, however, that the ProntoApp virus often comes along with other unwanted software, which might be difficult to find. For that reason, we suggest you scan your machine with anti-malware software to make sure all the suspicious elements are uninstalled. Additionally, we highly advise you reset Google Chrome, Safari, and Mozilla Firefox in order to prevent the unwanted activities of coming back.

To get rid of ProntoApp on macOS, you should find it and put it to Trash:

If you do not reset Chrome, you might see ads and redirects due to the PUP again:

If you are unable to remove the unwanted extension from Safari, reset it as explained below:

Your opinion regarding ProntoApp Cancel reply

You can quickly scan the QR code with your mobile device and have ProntoApp manual removal instructions right in your pocket.